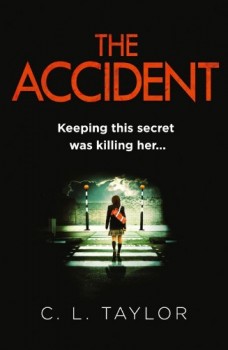 Susan Jackson's daughter Charlotte is in a coma after being hit by a bus – and she's the only person who thinks it wasn't an accident.

Susan Jackson is married to an MP. The Accident dives straight into their fraught life, as they wait to see whether their teenage daughter Charlotte regains consciousness after being hit by a bus. Everyone but Susan thinks it was an accident. She sets out to discover what happened – and uncovers secrets about all their lives.

Crime fiction fans will remember the avalanche of wannabes after The DaVinci Code. It looks like we shall now be swamped with writers trying to emulate the success of Gone Girl, with unreliable narrators. The Accident is engaging enough as a page-turner, but really it's bog-standard psychological thriller fare. Characterisation is thin and as the book went on, I found it hard to summon enthusiasm to bother about what happened to any of them. It raises that old chestnut about whether we can be made to care about unlikeable characters. And the answer to that should be a resounding yes, if you've read Patricia Highsmith's Ripley books.

Sadly, CL Taylor isn't yet on that level, although it feels like she has the ability to make it as a writer. And she faces an uphill struggle with a universally unsympathetic cast in forging a link between them and the reader. We don't have to like them, but we do have to feel an attachment. And I'm not convinced Taylor managed that – Susan's a doormat, the blokes are all pretty gross and the kids brats.

There's a good crime novel waiting to be written on mental health issues – but this isn't it. And that's frustrating, as Taylor has a good line there to pursue where no one believes Susan. Her medical issues seem rather perfunctory, and, as with much of the book, we are drip-fed information, but it's all done rather heavy-handedly. Speaking of which, the flashbacks are the main villain of the piece when it comes to slowing up the action. And the vengeful ex reappearing (this is not a spoiler!) is one of those crime fic tropes that should probably be put out to grass.

The Accident does at least avoid a totally easy ending, but by then Taylor had more or less lost me. If you read a lot of genre fiction and pride yourself on being able to spot the ending, the one here announces itself with the subtlety of a JCB!