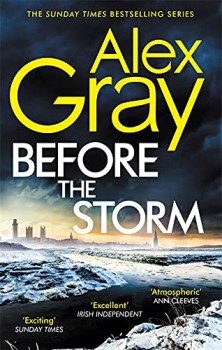 Alex Gray can make the sheer hard slog of police work interesting without ever over-dramatizing, as so many modern novels and television programmes feel forced to.

The 17 previous low-key tales of big Bill Lorimer, now approaching retirement as a Detective Superintendent and head of Police Scotland’s Major Incidents Team, have established her as an author of realistic procedurals. Her stories never concentrate solely on her protagonist, but always introduce lesser characters, nevertheless key to the plot, accurately reflecting the various arms of law enforcement, the personalities and their individual roles in bringing criminals to justice.

With a fine eye for detail and immaculate research her books offer some of the best descriptions of police operations I’ve read. While occasionally, but never gratuitously, brutal, every character, even those in walk-on roles, is believable and plays their part to the full.

It is this ability to bring her characters to life that lifts the stories out of the ordinary and makes them both believable and intensely human. The tone is set by Lorimer. Devoted to his work and his wife, principled, sympathetic and compassionate, yet not totally convinced by idea of policing as almost a social service and happy to go his own way if it can be justified by results. He also possesses a genuine senior officer’s sardonic sense of humour – and one or two of their prejudices, making him a refreshing change from the tortured, macho protagonists in much of the genre.

Gray has never been afraid to introduce total outsiders into her plots. Here it’s ex-Zimbabwean Inspector Daniel Kohi, forced to flee his country after his family are killed and his home destroyed when he refuses to join a ring of corrupt officers – a situation that sadly rings all too true.

Through the efforts of his church, he arrives in a pre-Christmas Glasgow, an asylum seeker seeking refugee status, lost in a land where he can hardly understand the language and unable to cope with the cold. But at least he has secure accommodation to begin to settle into what must become his new home.

On the way there he witnesses something that alerts all his policing instincts – a man with a bloody knife leaving and re-entering the back door of a firm of solicitors. Uncertain of his own legal position, he decides to keep a watch on the premises.

He is not the only one. The firm is suspected of money laundering for organized crime and possibly terrorist cells and Lorimer already has an undercover officer working there. While he congratulates himself on substantially reducing killings in the city, an obviously high-placed source within the force is leaking the details of undercover officers to the press, thus ending their usefulness and potentially putting their lives at risk.

At the same time intelligence sources receive reliable information that Glasgow has been selected as the target for an Islamist terrorist ‘spectacular’ to take place sometime over the Christmas and New Year holiday period. With three of his limited supply of undercover officers neutralized, Lorimer, working with a very limited number of the most senior ranks, must discover and stop an attack which could potentially kill or injure hundreds.

Two partners of the suspect solicitors’ firm are murdered and a third body found as the pace picks up, but it is impossible to link them directly the terrorist threat.

Meanwhile Daniel attempts to settle in, aided by the friendship and endless cups of tea from talkative elderly neighbour, Netta, who is herself being terrorized by collectors for a loan shark to whom she had turned to provide Christmas gifts for her family.

A talkative and friendly traffic warden – something entirely new to the Zimbabwean – mentions Lorimer’s name to him as someone to turn to if he needs help and Daniel utilizes his former rank to gain a meeting. The two men hit it off immediately and Lorimer hatches a daring – and strictly off the books – plan to advance both their inquiries.

The multiple plot strands work seamlessly together and are equally riveting. Gray’s story encompasses the experiences, good and bad, of refugees, loan sharking, terrorism and the extraordinary danger that police face when seeking to prevent atrocities.

At the same time she offers clever contrasts between the warmth of Africa with its emphasis on the extended family and the cold isolation of a Scottish winter. It’s an exciting mix that makes for thrilling reading in an absorbing and thoroughly entertaining procedural filled with great characters and a fine sense of place.