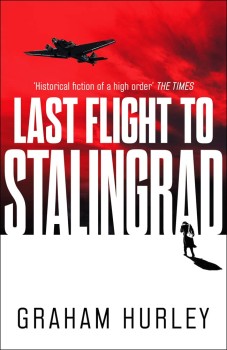 Propaganda journalist Werner Nehmann is sent to Stalingrad to put a gloss on the battle that marked one of the turning points of the war for the German people.

When you think there cannot be anything more to say on books set in wartime Germany, along comes one that completely overturns that view – providing a totally different experience from a different player’s point of view.

This meticulously researched and searing portrait of the Nazi elite as the war begins to turn against them is the fifth of Graham Hurley’s Spoils of War series, but there are no links to the earlier books, either in plot or characters. This raw and shocking story is a standalone in every sense.

Set in Berlin, Italy and the Eastern Front in 1942, it offers a multi-faceted portrait of a regime that after four years of almost uninterrupted absorption of most of Western Europe now faces its sternest test on the frozen Russian steppes. Von Paulus’ Sixth Army is making little progress in its bid to take Stalingrad in the face of fanatical Russian resistance. The city is seen by both sides as the key to the war in the East. The fighting in and around the city is described in bloody detail, but the arrival of the SS Einsatzgruppen – paramilitary murder squads responsible for mass civilian killings, is even more horrifying.

The story’s narrator and main protagonist is Werner Nehmann, a Georgian journalist who has adopted a German name and works under the brilliant, but nuerotic Reichsminister Josef Goebbels in the propaganda ministry. Nehmann, like most good journalists, is cynical and hardly a saint, but does have his own standards and retains a conscience – which will eventually lead him to a bloody confrontation with an SS officer leading one of the Einsatzgruppen.

As winter sets in and Von Paulus’ advance stalls, Goebbels, who has a deep understanding of the arts of manipulation, senses the mood in Germany – shocked by soaring casualties, shortages of food and other essentials – is turning. In the past his lies in word and film, first shook the nation awake, then propelled it towards its ‘greater destiny’. He will not – and cannot – allow morale to falter. But the Minister of Propaganda, deeply enmeshed in the power struggle of the Nazi elite as they compete for Hitler’s favour. is uneasy and in his discomfort has pulled Nehmann into his confidence.

He uses the journalist to take a letter to his former mistress the Czech actress Lída Baarová – a relationship ended on Hitler’s direct order. Unable to deliver the letter, Nehmann makes the mistake of keeping it as a form of insurance, but soon realises his error when he is posted to report on the Battle of Stalingrad.

While Goebbels who, unlike most in Berflin, does not believe his own propaganda, begins to prepare his countrymen for what an even more brutal war, Nehmann discovers the truth about the Eastern Front.

Graham Hurley, who clearly spent much of his childhood absorbing classic British war films, effortlessly captures the atmosphere of a major battle. His description of a bombing raid on Stalingrad and subsequent dog fight between German and Russian fighters is horribly realistic and his depiction of conditions where soldiers cannot push their frostbitten fingers inside the trigger guards of their rifles sums up the hell of Stalingrad.

This is hardly your run of the mill war story. Although the book starts slowly, it soon becomes a gripping read. The inclusion of real historical figures works well and acute observations of character, time and place make this an outstanding historical novel. This compendium of fear, betrayal, brutality and death at its most horrible is gripping, realistic and insightful.