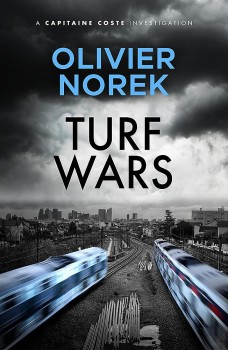 When a new drug lord is determined to make their mark on the tough Seine-Saint-Denis district of Paris, it’s not long before the area is on the verge of an all-out war between the gangs and the police. Against that volatile backdrop, Capitaine Coste and his team have a murder to solve.

The execution of three drug dealers in the tough Seine-Saint-Denis district of Paris sets off a chain of events that turns the area into a bloody battleground between the police and a new boss on the crime scene, who's determined to make his mark by taking out the opposition in a very visible way, including having one killing carried out right under the nose of a police surveillance team.

The new gangland drug lord makes use of a ruthless, deeply unpleasant teenage killer to do his dirty work (there’s a very nasty scene with a cat near the beginning that turned my stomach, so be warned) and it looks very much like the police are losing their grip on the district. Enter Capitaine Victor Coste who is investigating the torture and murder of an elderly man found in a lock-up garage. Coste and his team are caught between the drug squad and the gang as they try to concentrate on the murder, but ultimately end up in a volatile mix of gang violence and political machinations.

Turf Wars is brutal and utterly compelling. Olivier Norek writes with strength and authenticity from his career in the French police working in the area in which this series is set. He brings the same stylish but dark atmosphere to this book as he does to the classic French TV crime series Spiral, fortunately available with subtitles for those, like me, who can’t follow the quick-fire Parisian street slang. And anyone who enjoys Spiral will feel at home with Capitaine Coste and his team. They’re happy to stretch rules to breaking point – and beyond – at times and aren’t averse working against their own side when the occasion demands.

The local mayor, Andrea Vesperini - the sort of woman who makes you want to count your fingers after a handshake - is up to her eyes in dodgy dealings, but admittedly, that’s hard to avoid when you realise just how much the local economy depends on the proceeds of crime simply to function. Norek never sugar-coats anything and eventually, I even managed to summon a crumb of sympathy for Bibz, the brutal and brutalised teenage assassin. There is a tragic inevitability about his life and inevitable death, and in many ways the saddest thing is that kids like him don’t even expect to grow old.

This is a side of Paris that you don’t ever want to get to know in person. Seine-Saint-Denis might be small, but it’s anything but perfectly formed. It’s one of the many areas of deep social deprivation that rub shoulders with the bright lights of the popular tourist areas. The department has one of the highest crime rates in France and is no stranger to widespread riots. Norek brings out all this and more in excoriating detail that spares no one’s sensibilities, but it’s not all grim reading. I adored big, tough Markus plucked from the boxing ring to act as bodyguard to Vesperini’s daughter, Estelle. The scenes with the two of them are probably the only sweet thing in the book and, together with the banter between Coste and his team, serves to lighten an otherwise grim tale. Markus plays an important role in the highly charged denouement, and I very much hope we get to see him again in the series.

I certainly wouldn’t book into an Airbnb in Seine-Saint-Denis, but I will reserve a ticket for Capitaine Coste’s next outing, provided I can follow their exploits from the safety of my armchair with Markus to look after me. This is French noir at its darkest and it won’t suit everyone, so approach with caution, but I’m now well and truly hooked.