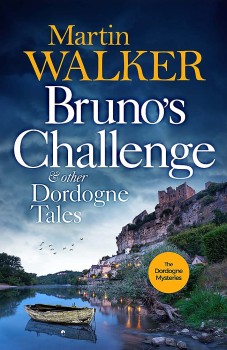 Martin Walker’s culinary cosies are one of my guilty pleasures. They’re set in an area of France I know intimately, they’re stiff with the sort of detail than only someone who has also spent a lot of time there would know, the culinary delights are always bracketed by fascinating historical details and there’s occasionally even some solid police work. He’s also the only person I know, native French included, who understands the roles played by the various branches of the French law enforcement system. For instance, I’ve never known why it’s the gendarmes (paramilitary rather than straightforward police) who lurk in the bushes with speed guns in our valley. It might be that they do have a traffic regulatory remit, or it might simply be that the ones stationed in Condat are bored stiff, but no doubt the creator of Bruno, Chief of Police, could enlighten me!

This collection of short stories is prefaced by an author’s introduction that provides a useful crib sheet for newcomers to Benoît Courrèges, known to all as Bruno, the former soldier turned local cop answerable to the mayor of his rural commune, the picturesque St Denis in the heartland of the Dordogne region. Over the course of the series, Bruno’s remit has expanded to include the whole of the Vézère valley, and the crime rate seems to have expanded at the same rate, with terrorist incidents and murders rising to such a pitch that you’d be forgiven for thinking that Bruno is paying people to cause trouble just to give himself something to do!

Bruno is universally popular in the area, except amongst the criminals he nabs, and several of the tales in this collection of 14 short stories showcase his involvement with the local community. In Bruno’s Challenge, the title story, local restaurant owner Ivan is taken to hospital with a ruptured appendix on the day he is due to host a golden anniversary dinner for two popular locals, and naturally Bruno is pushed into the breach by his friends, who equally naturally all rally round to produce a splendid banquet. No crimes are committed apart from the undeniable crime of making me want to go to my favourite French restaurant in in the market town of Sarlat just when the borders closed due to covid again and I was stuck in England!

Food features in the equally crime free story of Bruno’s birthday lunch but matters hot up somewhat in The Chocolate War when there’s a clash between old and new on market day but Bruno sorts matters out with his characteristic diplomacy and peace is quickly restored. Bruno’s dog Balzac even plays a part in local policing in The Lost Boy when he helps in the search for a lost child and if anything bad ever happens to that adorable basset hound, I’ll be in therapy for months.

Périgord is known for its love of rugby (I have a Sarlat rugby team covid mask and rugby expert Sharon, intends to make sure I get to see the Brive team play at some point!), and the huge meal at the start of the season is as popular as the game itself. In A Question of Chabrol, Walker uses this as an excuse to explore the origins of the custom of using a swill of red wine to finish up the last drops of soup in your bowl, which is something I’d always wanted to know.

There are a few real crimes committed here and there, including a nasty spate of vehicular sabotage in Dangerous Vacation, and there’s even some out-of-town policework for Bruno when he’s roped into an operation to catch a gang of oyster thieves in the scenic Bay of Arcachon. Oystercatcher sees Bruno reunited briefly with his on-off lover Isabelle who’s down from Paris to help with the operation, and for once, Bruno even gets the opportunity to fire his service pistol. It’s always nice to see Bruno get together with Isabelle and I live in hope that he’ll stick with her rather than the annoying Pamela, but Isabelle’s career aspirations aren’t compatible with Bruno’s unwavering love of his home, so that might be a while coming to fruition.

The always fascinating historical perspective that imbues most of Walker’s tales comes in with the bittersweet story, The Collaborator, which delves deep into the troubled wartime years that still cast a long shadow over the region. In some villages there are still local feuds that date back to events during the occupation. Walker’s research is always impeccable and his insights into long-ago events are interesting and often desperately poignant. This story of an exile’s wish to be buried in his family vault is one of my favourites in this collection as it showcases the best of Walker’s writing in this complex tale of the loss of civic rights and the righting of old wrongs.

These short stories have something for everyone, whether you follow Bruno for his culinary expertise, his local knowledge and loyal friends or his policework. They’re mostly light and fun, but with the occasional darker gem that hints at the complexity and depth of one of the most beautiful regions of France. And if you’ve not met Bruno before, this would be a very good place to start.