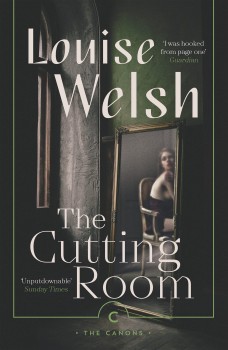 When Rilke is called to a house clearance in a respectable Glasgow suburb, he immediately knows he’s sitting on a goldmine, but the auction job turns out to have a darker side.

The first thing an auctioneer learns is to ignore expectations. The person who says they have an Old Master and a horde of Georgian silver in the attic will (almost) invariably turn out to have a load of old junk, but then hidden gems can be found where they’re least expected. It’s a game that Rilke – just Rilke, no first name – has been playing for years since he first started work at Bowery Auctions.

The auction house is struggling and needs a good sale to get them back on their feet, so when Rilke is called to a large house in a respectable suburb of Glasgow, he has to remind himself to clamp down on any expectations. Despite that, he quickly realises that he’s walked into a goldmine, with the prospect of a sale that could get Bowery Auctions back on its feet. The only snag is that the elderly Madeleine McKindless, whose brother died three weeks ago, wants the house cleared in a week. Rilke knows that’s pushing it, but he can’t let this one slip through his fingers. He’ll get it done, he always does, even if his boss, Rose, is going to be furious, but he knows she’ll see it his way – eventually.

The discovery of a vast collection of classic, extremely rare pornography in the attic explains why Miss McKindless requested Rilke’s discretion. Rilke, who usually thinks of himself as pretty broadminded, is shocked by the discovery of old photos of young women being abused, and he can’t stop himself from wondering whether they were simply carefully staged for the camera or whether he was looking at a snuff scene. Rilke’s curiosity, and sympathy for victims now long dead, sees him drawn into the disturbing world of old pornography and new abuse in the dark underbelly of Glasgow.

The Cutting Room, Louise Welsh’s debut nearly 20 years ago, has now been brought out in paperback to mark the appearance of a sequel. I read the second book, The Second Cut, first, then immediately sought out the book that launched Rilke into the world.

Tall, cadaverous-looking Rilke is 43 and has been working at Bowery Auctions for 25 years. He still occasionally cruises for men in Glasgow’s gay hotspots, and after his first disturbing brush with the dead man’s photograph collection, he’s picked up by the police on a charge of outraging public decency in a park. His brush with the law ends up in an off the record chat with Inspector James Anderson, an old schoolfriend, and the conversation further piques Rilke’s interest in the dead man and his predilections.

I’ve had a long-standing interest in art, antiques and antiquities and was immediately drawn into the slightly shady world of Rilke and Bowery Auctions. Rilke is a fascinating character, his world-weary cynicism leavened with the occasional flash of altruism and sympathy. Louise Welsh perfectly captures the darker side of Glasgow where everything has its price, whether that’s a piece of furniture or a human being selling their body or having it sold against their will. Her writing is stylish and flows as effortlessly and sometimes as treacherously as a river in spate throwing up enough detritus to trap anyone foolish enough to brave its dark waters.

The seedy side of Glasgow where tolerance and intolerance jostle for precedence comes to life in Welsh’s skilful hands and is the perfect setting for Rilke and the sprawling cast of characters, including the hard-boiled Rose who owns the auction house, cross-dressing Les who knows a lot of people and can supply information – for the right price, of course – and a host of others who come together to create a world as rich as an antique Persian rug and as dangerous as a broken bottle in the hands of an angry drunk.

I was very, very glad I didn’t have to wait 20 years before I encountered Rilke again. He’s far too entertaining to pension off.