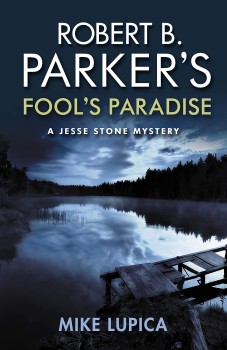 Police Chief Jesse Stone grapples with the case of a man who made the journey from Florida to Paradise only to end up dead on the evening of his arrival.

Mike Lupica takes us on another trip through Robert B Parker’s world, where we meet not only recovering alcoholic police chief Jesse Stone, private eye Sonny Randall, with whom Stone is enjoying a relationship, and even Boston PI Spenser gets a mention, although doesn’t put in an appearance unlike his sometime friend Vinnie Morris.

Stone is on the wagon, but still fending off his demons. When a stranger in town is found dead, he recognises the man from his visit to an AA meeting the previous evening. Apart from a first name, Paul, nothing is known about the man except that he took a taxi ride to the home of the Cains, one of the richer families in town. The Cains deny that he was ever at the house, and it takes most of the book before Jesse finds out why Paul made the trip.

Detecting activities in that case rather take a back seat, however, when a rifle shot barely misses Stone on his porch one evening. Shortly afterwards his deputy, Molly Crane, fights her way out of an attempted rape in her back yard, and his protege ‘Suit’ finds a pipe bomb at his home. A trawl of old cases suggests there might be several antagonists with a motive, but one particular case stands out: the rape of Candace, a local schoolgirl.

The offenders were the girl’s classmates, class bully Bo Marino and two of his friends. Marino’s father funded energetic legal representation that secured an acquittal, but the reputation of the boys was shredded and Marino threatened retaliation at the time. Those that Stone can find deny involvement in recent events, but when all three, and then Candace, go missing, Stone knows he needs to act.

There is something comforting about Parker’s world, despite the somewhat spectacular death rate. The characters are familiar and the patter is generally entertaining and agreeable, with recognisable catch phrases, and so on. Even exchanges with hostile characters take the form of laid-back point-scoring exercises, which Stone usually wins, of course.

Sonny is brought in to provide protection for Molly; the two dub themselves Thelma and Louise. The proximity to Stone provides the opportunity for an affair but I can’t see it lasting, Sonny will miss Rosie the dog (left back in Boston with Spike) and living with Stone’s drinking problem could get old very quickly.

Apart from alcohol, Jesse’s other preoccupation is baseball, something he was good at before his shoulder injury. His knowledge of the sport is probably better than his understanding of soccer: he recalls one of the Cains playing ‘centre middle, number ten’. Some weird US position perhaps.