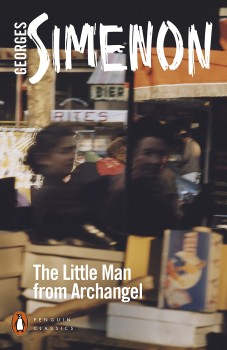 The Little Man from Archangel

When his wife fails to return home one night, Jonas Milk finds himself suspected of murder by neighbours who he always regarded as friends – but he comes to realise that what he imagined was acceptance is in truth only skin-deep.

This re-issue of Georges Simenon’s work was originally published in 1956. The story is told from the perspective of bookdealer Jonas Milk. Milk was born of Russian parents in Archangel but has lived all his life in France and having completely lost touch with the rest of his family now lives in the small rural town where he received his education.

Milk is mild and unassuming, and in his 40s has settled into a routine around the buying and selling of books, buying his breakfast croissants, taking coffee at the local cafe and eating at Pepinos. His marriage to Gina a couple of years ago came as a surprise.

Gina is an attractive if untidy woman in her 20s whose mother persuaded Milk initially to take her on as a cleaner to keep her out of trouble. Although Gina regularly cheats on Milk he feels no resentment; on her latest jaunt she took postage stamps worth a fortune from him, assembled during a lifetime at the hobby, but the monetary loss plays no part in his thoughts.

Gina is generous with her sexual favours both before and after marriage and Milk is accustomed to absences of a day or two. When she disappears for several days, however, tongues start to wag. To save Gina’s blushes, he excuses her absence in a way that is easily disproved. After a week, the police start to take an interest, and from their questions it becomes clear that Milk’s neighbours have been observing him and ascribing dubious motives to his most innocent actions.

Milk becomes aware that his neighbours of many years stop talking when he passes, and that he is the subject of morbid speculation. These people, who he fondly imagined felt comradely towards him, now make him the butt of their worst opinions.

Milk’s house, the market in the centre of town, and the typical scenes of small-town life are sketched out with brief and telling detail that instantly brings the setting to life. Simenon’s observations through the eyes of Milk provide an utterly convincing portrait of the man, and despite his undoubted oddity, a sympathetic portrait too. He’s a man who asks for little, but for that very reason is not understood. As usual, Simenon demonstrates mastery of the human condition.