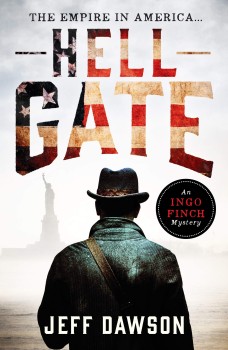 Ingo Finch visits New York in 1904 on behalf of British spy masters to expose the machinations of pro-German agents in the USA.

This is the third outing for Ingo Finch, a British doctor who became embroiled in espionage during the Boer War and has now been pressed into service as an MO3 (Military Operations, Section 3) agent. On their instructions he takes the RMS Baltic to New York, and is briefed during the journey that his task is to discredit a senator, Schultz, who is stoking German-American antipathy to the Entente Cordiale in the USA.

On arrival, Finch is met by representatives of the National Bureau of Criminal Identification (NBI) and the New York Police Department but has been instructed that he is to work alone. It soon becomes clear, however, that his liaison has been observed and that his alias, Collins, has been penetrated. He survives an attempt to blow him up in his hotel room by the narrowest of margins.

At the invitation of his NBI contact, he visits a boxing match and then a nightclub owned by Muller, a gangster reputed to do strongarm work for Schultz. There he is drugged and is lucky to escape from the ghastly fate Muller had planned for him. After that, Finch has to go on the run, accompanied some of the time by Muller’s girl, the beautiful Katia.

The plot is probably best not submitted to close examination, but the action is non-stop, with plenty of evil foes, dastardly deeds and close shaves for the hero. Finch tangles with plenty of colourful characters such as the feme fatale Katia, and several gangsters, mafia and otherwise, including Muller and his henchman Teetonka, a Blackfoot Sioux and one of the few survivors of Wounded Knee.

What distinguishes Dawson from competitors, and in many ways the most interesting facet of the tale, is the frequent references to current matters which have some resonance over a century later. The Baltic is a White Star Line boat, for example, and its captain Smith is said to be expected to be given the opportunity to move to one of the new liners currently in planning, the Titanic and its sister, the Olympic. The book is full of such asides, many informative about ideas or events that have their origin in the first decade of the 20th century.

As usual with stories set in the past it is tempting to give the protagonist modern sensibilities, to make him sympathetic to present-day readers. This can feel a little unlikely, especially when (as I detected a few times here) Finch seems uncannily prescient about nascent social developments. It’s probably a mistake to over-analyse; this is a robust adventure set at a time and place where life had plenty of rough edges, with a few historical details thrown in for interest.