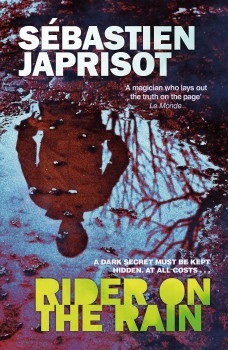 Rider on the Rain

In an out-of-season Riviera resort, a bus brings a solitary visitor who turns the life of housewife Mellie Mau upside down.

Mellie Mau is staring out of her mother’s Cap-des-Pins amusement hall into the rain when she sees a man carrying a red bag alight from the bus, the sole passenger on a cool autumn day. She encounters him again later that day, and then a third time when he enters her nearby house and rapes her.

Mellie awakes from unconsciousness, and despite her confusion realises the man is still in the house. She grabs her husband’s shotgun and kills the intruder. Then, fearing the scandal that would result from public exposure, she disposes of the body and cleans up.

Mellie’s husband Tony, a navigator with an airline, returns home and Mellie manages to conceal events, and her unease. Her anxieties return, however, when at a local social event an American man, Harry Dobbs, tells her he knows what she has done, and demands the red bag formerly in the dead man’s possession, which he suspects Mellie has concealed.

Tony departs again, leaving Mellie alone to face the insistent pressure from Harry. He claims not to be police, but his status is unclear; he is certainly good at extracting details of Mellie’s movements and gradually forces her to admit certain facts. However, she consistently denies killing the rapist, even when Harry forces her to drink a bottle of whisky and presses her for answers.

This story was first published 30 years ago and, as with Japrisot’s other works, received acclaim for its style. It is unmistakably French, with the lead character being the chic woman familiar from cinema, and there is a combination of noir and puzzling facts that sustains interest.

One peculiarity is that dialogue is given with the speaker’s name in italics preceding, as if it were a screenplay. The author was also a screenwriter and film director which might explains this oddity, and it is easy enough to overlook. The translation is excellent, and the gallic flavour comes through strongly.

The only aspect that seems to reflect the age of the book is the ease with which Mellie’s desire to suppress the truth was assumed; these days one would hope that the victim of a rape could expect more sympathy. Not that I would argue with Mellie’s solution, then or now.