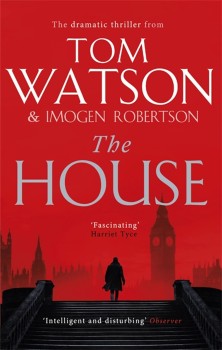 Labour MP Owen McKenna receives a demand to withdraw a parliamentary question, under threat that his role in the tragic case of a former colleague will be exposed in the press.

The title of this book can be taken to refer to parliament, the centre of activity for all the characters, but also harks back to the site of crucial events in 2008/9 when the protagonists shared accommodation at the start of their careers. The narrative shifts back and forth between that time and 2022, when the book is set.

The house was shared between four people, all at the time working for the Labour Party: Owen, Philip, Georgina and Jay. The authors convey convincingly an atmosphere of belief and dedication that enabled the group of bright young enthusiasts to commit long hours for low pay and scant praise. Events take a dark turn, however, when Jay finds that someone is spreading rumours about him. His reputation is severely damaged, and his despair leads eventually to a catastrophic result.

Owen has felt some guilt over his share in these events for the past 11 years but the matter is brought forcibly to his attention when he is threatened with a hostile press exposure of his role in the affair if he does not withdraw a parliamentary question he has tabled about the use of NHS data. The question highlights the profits made by some private companies by mining the data, and the reluctance of the appropriate department to use available systems to limit the information released.

The book covers a period of weeks over which Owen looks back in detail at the period ending with Jay’s downfall, and after many years makes contact with Philip, from whom he has been estranged since Philip’s desertion of Labour for the Conservative Party. As the detail of past events is slowly revealed, we come to understand what happened to Jay, and Owen realises how he should proceed.

Tom Watson’s experience in the highest political spheres, in government and out, has no doubt contributed to the sense that life at Westminster is realistically depicted here. Since The Thick of It hit the screens it has been difficult to regard politics other than in a certain way, and both its frenetic pace and vituperative relationships find echoes in this book. There are also passages that make a case for the value of politics and the passionate belief that motivates many politicians; in other words a balanced picture is presented.

The story is well told, and the knowledge and skills of the two authors mesh well to regulate the pace at which the reader is allowed to build up suspicion about who really torpedoed Jay’s world. I also liked the spare details about life in 2022, where Covid is still a problem and the combined effects of the virus and Brexit has had a distinctly negative effect on life. One fervently hopes that the authors’ fears are overdone.