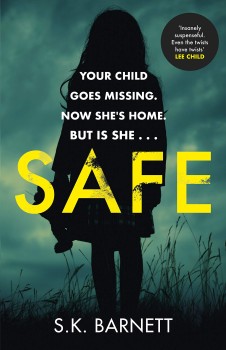 Jenny, kidnapped as a six-year-old, is back. But 12 years have changed her. Some would say beyond recognition.

Jenny Kristal disappeared without trace on an ordinary day while walking to her neighbour’s house for a playdate. At first, the six-year-old was headline news, but over the weeks and months and years that followed, other catastrophes shoved her to the bottom of the pile. Until it was really only her family who refused to abandon hope.

Twelve years later, Jenny walks into a police station near her parents’ Long Island home. After offering a sketchy account of her abduction and the intervening years, she returns home with her loving family, hoping to draw a veil over the past and open a door to a better future. But 12 years have changed her. Some would say beyond recognition. Unfortunately, Jenny is not the only one in her family who has secrets. And not everyone is pleased to see her.

Safe is an illusion. Danger is Jenny’s reality. And someone won’t come out of this alive.

I believe that they-all-lived-happily-ever-after tales are stories cut off at the knees. So, I was fully expecting a reunion that turns ugly. A gift-wrapped box hiding a viper’s nest. A traumatised soul whose idea of normality is warped. In that respect, Safe should have satiated my appetite.

Unfortunately, despite Jenny having gone through years of abuse in every form, I couldn’t connect with her. And as most of the book is from her point of view, I felt distanced and not particularly invested in her story. I expected to get inside her head and see the turmoil that sent her down her own dark path. I think the author was trying to create a picture of a mysterious and complex young woman.
But rather than being flawed yet still able to pull my heart strings, Jenny just made me annoyed. It didn’t help that the author’s voice came through too strongly and was in direct conflict with that of the main character. It is rare for an author to perfect the voice of a character of a different age, let alone someone of the opposite gender. That elusive perfection has not happened here.

The other characters are underdeveloped, despite occasionally taking centre stage. My frustration from following shallow characters was made worse by a sense of déjà vu so strong that I wondered if I had already read the book. No, it was a case of an unoriginal plot and sadly predictable twists.

There are simply too many conveniences, including Jenny’s new-found friend being just what she needed – a computer hacker. I am sure there are an increasing number out there, but her emergence was too easy. Then in an age where not brushing your hair properly can create a wave of online commentaries, what Jenny did before she got to the police station (not once but several times) would have flooded the internet. She would never have got away with it. And, in the most unlikely of conveniences, someone was stupid enough to leave incriminating photos on a computer for 12 years. I would like a computer that lasts for 12 years! This book is based in the 21st century, but it doesn’t feel like it.

The ending has more twists than a 1960s dance floor, each seemingly placed more for the shock factor and less for a realistic denouement than the last. That said, for anyone who can cope with the disturbing aspects of the story (abuse, drugs, violence), Safe is easily read, fast moving escapism.