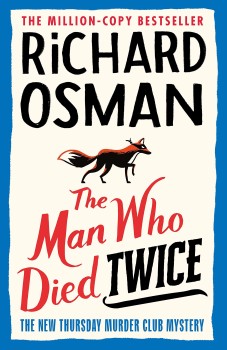 The Man Who Died Twice

The Thursday Murder Club rides out again. This time they're on the trail of £20,000,000 in stolen diamonds and some violent and ruthless international criminals who surely won't let a bunch of old-age pensioners stand in their way...

If you enjoyed The Thursday Murder Club, then you will enjoy this follow up just as much, possibly more. It is best to read the books in order because the author's success derives from his clever combination of fully rounded characters with credible developing relationships and a rip-roaring, fast-moving, all-action plot.

The four members of the Thursday Murder Club are once again the mainstay of this new adventure, with a few new faces (good and bad) thrown in. At Coopers Chase Retirement village we find ex-spy Elizabeth and her husband Stephen (he is stricken by dementia but can still play a mean game of chess); trade union man and salt of the earth Red Ron; psychiatrist and thinking man Ibrahim and last, but certainly not least, sharp-witted Joyce, who entertains with her diary entries. Richard Osman gives credit in his  acknowledgements to his own mother for an endless supply of material – is she Joyce? PC Donna and DCI Chris are here again to represent the law along with hunky handyman Bogdan – everyone's favourite Eastern European – always there when you want him with a winning combination of brains and brawn.

Initially things are a bit quiet at Coopers Chase for the fab four but then Ibrahim gets mugged and seriously injured on a trip into town and Elizabeth receives a note from a man who was supposedly bumped off years ago during her Secret Service days. Ibrahim's friends can't let that go and Elizabeth's curiosity gets the better of her – and that's when life begins to hot up for the Murder Club.
The search for Ibrahim's attacker and the search for £20,000,000 in stolen diamonds neatly dovetail. And while the bodies pile up, we encounter international money launderers, ruthless Colombian drug lords, MI5 Agents, the Special Boat Service and the New York Mafia – and none of them want to be outwitted by four septuagenarian has-beens!

Richard Osman can write about the most unsavoury characters with such wit that he gets away with murder. And he writes about his regular cast of characters with such warmth that you really do care about what happens to them.
He obviously has a very soft spot for the elderly and it's great to read about a group of friends who are knocking on a bit but who are, in the main, leading fantastically racy lives and taking on international criminality. Yes, it's far-fetched; yes, you have to suspend your disbelief … but it's pure entertainment. You may find it hard to believe in the plot (although the book is very tightly plotted) but you won't find it hard to believe in the sweet and subtle relationships on display here.

At the end of the day the book is movingly and satisfyingly top and tailed. Peace returns to Coopers Chase – but not for too long, I hope. I see that a third book is in the pipeline. Good – more power to the oldies’ elbows.