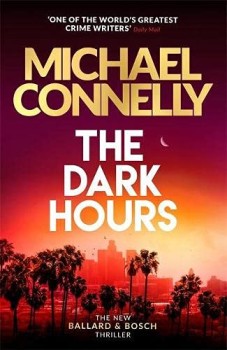 Renée Ballard calls in Harry Bosch as her latest case shares a feature with one of Harry’s unsolved cases from ten years earlier. She is also trying to identify two rapists who have been dubbed The Midnight Men.

I read many Michael Connelly novels, including Fair Warning and The Law of Innocence last year. He remains a favourite author of mine, having drawn me into the fold with his Bosch series long ago.

With this one, however, Harry Bosch very much plays second fiddle, arriving on the scene a little way into the book and not featuring too prominently thereafter. This novel instead primarily showcases Renée Ballard, who, generally speaking, works nightshift at the police department. She carries some disillusionment with her life and job, however, and is pondering a return to Hawaii.

There are two story threads in The Dark Hours.

The first relates to the shooting of Javier Raffa during the New Year celebrations. He is a former gang member, who bought his way out of gang membership with a one-off payment many years earlier. Ballard is on duty and gets called into the case. As guns are fired indiscriminately during the New Year celebrations, the challenge for the police is to work out whether Raffa was shot accidentally or intentionally. Ballard is meant, and instructed, to hand over the case to Homicide, but fails to do so and is eventually suspended for insubordination.

The second thread is about The Midnight Men, as Ballard has dubbed them. This is a tag-team of rapists who only work at night and appear to target women who have had recent relationship breakdowns. Nothing else appears to tie the victims together.

The catalyst for Harry Bosch's involvement is a ballistic finding in the Raffa case. The bullet is linked to an unsolved case ten years earlier when Harry was the investigating officer. Ballard calls him in to brainstorm, unofficially, of course, given that Harry is no longer flavour of the month in police circles, having previously defended his half-brother against the police. Harry identifies the nexus, both victims had participated in 'factoring' arrangements, ones where, to get money upfront, a person sells their rights to future revenues to an investor, at a discount on face value. Raffa didn't have the money to exit the gang so made use of a factoring facility.

A second thread in a book is sometimes used as filler material, but that is not the case here. However, by definition, two threads can often mean that the plots are a little thinner than usual and that can be said of this sub-plot.

Ballard is stubborn, determined, case-driven, more enthusiastic for giving orders than taking them, and very impulsive. Sound familiar? She also appears to have a new love interest as well as a new dog and I suspect we'll be seeing more of her.

Neither Maddie, Harry Bosch's daughter, nor Mickey Haller, his half-brother, feature in this story, except indirectly. The book is topical in that it references the Capitol riots in January 2021, as well as the COVID-19 pandemic. Ballard, at one stage, even takes Bosch to get his first vaccination.

There is so much to like about Michael Connelly’s books. They are always nonsense-free and generally without silly heroics. The books are always well-written, carry good insights into police procedures and have characters who are easy to align with. And, I must say, I do like the incremental progress with cases rather than a reliance on single late lightbulb moments to solve crimes.

Some authors lose their way in carrying a single protagonist for too long. Although it may be a controversial view, for me the Lee Child-Jack Reacher combination comes to mind. Connelly has avoided that curse and is keeping Bosch in the picture nicely, while promoting Ballard as his new protagonist. If, of course, she manages to keep her job.

Overall, this doesn't rank as one of his best, but it doesn't need to be, as a Connelly novel remains better than much of the genre and this was still a satisfying excursion.