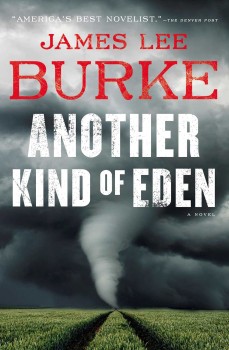 Another Kind of Eden

A Korean War veteran is looking for freedom and enlightenment in the American West in 1962. Peace beckons through his love for an art student but then a meeting with a psychopath makes things start to spin out of control.

Aaron Holland Broussard is damaged goods. He grew up in Texas and Louisiana (just like author James Lee Burke) and was diagnosed as a teenager with dissociative personality disorder, with what he describes as three different people sheltering inside his skin. And, in his own words, he’s suffered from nonchemically induced blackouts all his life. Traumatic battlefield experiences in the Korean War have intensified his problems.

Somewhere along the line he has acquired a journalism degree and aspires to be a novelist; but now, in 1962, he is riding the box cars across America, hobo-style, to escape his demons, declaring that what he describes as the migrant way of life was created especially for people like him.

He jumps off in Colorado, with his buddies Spud and Cotton. They make for the town of Trinidad and find work with Jude Lowry, a public-spirited paragon and exemplary employer. Then they meet the locals: notably the psychopathic grotesques, Rueben Vickers and his son Darrel; alluring art student, Jo Anne McDuffy; the Svengali figure, Henri Devos; and Wade Benbow, the cop on a mission. The riotous, anarchic assembly of spaced-out beatniks, living in a bus, are so well portrayed that they must have been drawn from life. Naturally, things turn nasty quite quickly.

If this sounds a bit formulaic, that’s because it is. Nevertheless, it has the makings of a gritty American West tale of venality, murder and revenge, in an atmosphere of brooding violence and lurking malevolence. Then the strange stuff begins.

The story gradually morphs into a meditation on madness. Aaron says that sometimes he goes to a dark place in his head, and he don’t know how to get back. He says he has learned that we should not question the presence of madness in most of the human race. This statement certainly applies to most of the characters we meet in this book.

The book becomes odder and odder it becomes with characters such as the Man with Black Holes for Eyes; Phantom Comanches; the stick figures like human sized praying mantises; the shade of Saber, Aaron’s best buddy in Korea; poor dead Moon Child. Aaron is a white knight for all his delusions, described as a babe among the heathens, by the ambiguous Mrs Lowry. His confusion only deepens when he comes to the belief that there was no rational explanation for what he had seen.

Burke is a talented writer. The dialogue is generally natural and in character; the action is melodramatic, but the best scenes are taught and convincing. Sometimes both come off at the same time, as with Aaron’s first encounter with the maniacal Rueben Vickers, but the prose is uneven and occasionally over-wrought, with a tendency to distracting gothic metaphor. He is also self-indulgent. As he works towards the climactic events, he treats us to a passage of trite moral speculation to underpin the mood of supernatural foreboding he is attempting to invoke. For me it generated irritation rather than tension.

For such a short novel, it feels surprisingly baggy because of its circular, repetitive story line, until the apocalyptic denouement in the box canyon, in which consistency of character dissolves away and the narrative descends into something very close to incoherence. The main difficulty is that Burke insinuates that some, perhaps all, of the narrative might be taking place in Aaron’s dream world not in reality but the strands are not woven together in any plausible manner, and things are left unresolved after the horror fantasy climax, which unintentionally flirts with the comic.

A New Kind of Eden is an exasperating book because it is so good in parts but is betrayed by the author’s decision to weave elements of magical realism into the narrative. It is a bold experiment but, in my view, it fails.

Timothy Field retired from the international oil business as soon as he decently could to devote his time to his true interests: books, the outdoors, sport and the arts. He cannot recall a time when he was not engrossed in a thriller.