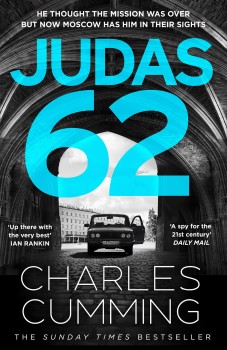 Secret agent Lachlan Kite faces peril in Dubai as a brutal ghost from his past works his way down a Russian kill list – with Lachlan and one of his key contacts next in line.

The premise at the heart of Charles Cumming’s latest cycle of novels is improbable. A bunch of US and UK intelligence officers, disillusioned with the constraints imposed by bureaucrats and politicians on their respective services, have for years been running a totally secret, trans-Atlantic organisation of their own, which is somehow very well-funded and equipped with some impressive, high-tech kit.

However, it works – largely thanks to the strength of Cumming’s writing, his attractive and complex central character, Lachlan Kite, and the only too realistic situations with which he has to deal.

Like the first in series, Box 88, the second book, Judas 62, takes place in two widely spaced periods, first Lachlan’s youth, when he’s just starting to learn his tradecraft and to develop as a man, and then his current middle age, when he has become a very senior spook with a lot of emotional baggage.

In the early segment of the story, he has to try to arrange the exfiltration of a Russian weapons scientist from the dreary city of Voronezh while posing as a teacher of English. In the second, he has to try to try to save the same man from a Skripal-style assassination in Dubai, after discovering that an old and brutal adversary is murdering his way down a list of victims, now all living abroad, who he deems to have betrayed the Motherland back in the day.

Both scenarios are presented with a vivid sense of time and place. Having made several working visits there, I’ve always felt that Dubai would make an excellent location for a thriller, for in real life the city is awash with intelligence officers from the West, Iran, Israel, Russia and other parts of the Middle East.
Few places on the planet are more superficially glamorous, with the emphasis on the superficiality. It may be replete with expensive bars and restaurants, but even the most supposedly respectable are haunted by trafficked women: Dubai’s rulers seem almost to encourage expat debauchery while professing to maintain Islamic standards for those born in the Emirates.

David Rose writes investigative articles for the Mail on Sunday. He is the author of six non-fiction books and a spy novel.