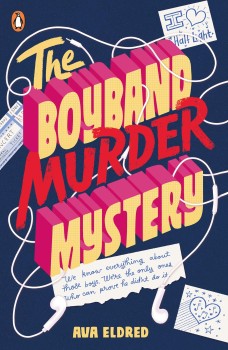 When the frontman of boyband phenomenon Half Light is arrested on suspicion of murdering his best friend, his army of fans are determined to prove his innocence.

Boyband fan and music industry insider Ava Eldred’s debut delves deep into the world of the often unfairly derided subset of fandom known as bandom where fans happily obsess over their current musical favourites, poring over the minutiae of their daily lives and loves.

When I was a teenager, my contemporaries would dive on glossy magazines for their fandom fix in the long-ago days before I’d ever encountered the concept of fandom – a shared love that crosses all boundaries – and I can still remember who amongst my friends preferred David Cassidy over David Essex and yes, we were all united in sneering at the Osmonds. My own favourite was the lead singer of Mud, and after that embarrassing admission, I’ll move swiftly on, but now that my secret’s out (along with my age!), you’ll understand why I pounced on the Boyband Murder Mystery with almost indecent haste.

Harri and her friends adore Half Light, the latest international boyband phenomenon, bonding over a love of the boys and their music with friends they’ve made online. Friends they spend more time talking to than their own families.

When lead singer Frankie is arrested on suspicion of pushing his oldest friend Evan to his death, the foundations of the fans’ world endure an earthquake very high on the Richter scale. They can’t – and won’t – believe that Frankie could be guilty. They know him better than the press and certainly better than the police and they’re determined to put their knowledge to good use. They’re going to prove Frankie’s innocence and it’s never wise to come between a fangirl and her obsession as everyone connected with Half Light – including the real killer – is about to discover.

Harri and her friends are an engaging bunch, reminding me of my own fandom friends – people I first bonded with online and then got to know in ‘real life’, a phrase that always irritates me as for me and millions of others, fandom life is just as real as in-person life. Friendships matter just as much, and are often more intense, as are the highs and lows. The vast majority of teenagers now have some connection with fandom, whether it’s through music, books, TV or films and understand the importance of a shared love. And it’s not just a teen thing. Even adults aren’t afraid to admit to this sort of thing now.

The Boyband Murder Mystery provides an inside view of the world of bandom and how Harri and her friends bring all their determination and inventiveness to bear on the problem of proving Frankie’s innocence. The story progresses both subtly and cleverly through an ever-shifting landscape of what’s real and what is a carefully managed front thrown up to mask a possible decline in popularity and success.

Eldred never pokes fun at the world she describes and brings the intensity of teen friendships vividly to life through the interactions of Harri, Jas, Alex, Gemma and Ruby, all distinctive characters with equally strong personalities and skills. The danger of learning your idols have feet of clay comes over strongly but that doesn’t shake the girls’ determination to do the right thing. The band members are equally well-depicted, and there’s the added complication that Frankie and fellow band member Jack are now openly in a relationship, much to the delight of their fanbase. This becomes central to the fans’ investigation in unexpected ways and threatens to explode another bomb under everyone.

I was completely captivated by both the characters and the plot. Eldred’s convincing and well-written story about a bunch of teenagers determined to solve a mystery will appeal to anyone who has ever sought out people to happily obsess with over a shared love. The thorny subject of how to move on from something but still maintain the ties of friendship is equally well handled. I adored these sassy, clever, kind girls and was fascinated by the mystery surrounding the charismatic but troubled members of Half Light.