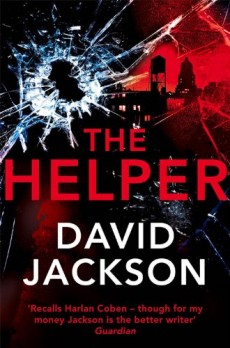 A murder victim in a shabby bookstore appears to be a message for Detective Callum Doyle. In mysterious phone calls Doyle is told he will be given clues to more deaths – provided he keeps them to himself. Should he conceal knowledge that could stop these vicious and apparently random killings?

This is a second outing for David Jackson’s go-it-alone Irish-American New York detective Callum Doyle, a man who always seems on the outer edge of police work. It features a cleverly executed and unusual story line which will keep readers guessing right up to the last page, which itself reveals one final shock.

Doyle is hardly the brightest card in the detective box. Although determined and with a real empathy with the victims of crime, he has an innate ability to make enemies of his colleagues, a nose for trouble and an occasional nice line in black humour.

The opening chapter sets the tone for what follows. Doyle is sent, almost as an add-on, to a particularly vicious killing in a bookshop and finds a clue which seems to point particularly to himself. Soon he starts receiving phone calls from someone who claims he can prevent further murders, provided he can solve the clues he is offered – and promises to keep them to himself. Doyle agrees, but cannot penetrate the killer’s mind, and more killings of increasing brutality, but different methods, follow.

The sick informant, who styles himself The Helper, baffles both the detective – and, nice technique here, the reader – in a series of clues within clues and twists almost impossible to see coming. How is the killer choosing his victims – and how does he know so much about them and also about Doyle and his family life? Running parallel to the central investigation is Doyle’s involvement with a wealthy old lady seeking the truth about her daughter, missing since the terrible events of 9/11, and his ongoing problems with the bunch of wisecracking, insular idiots who comprise the detective department of the 8th Precinct.

The book is well written, the plot both tortuous and ingenious and Doyle’s blundering and stumbling investigation well suited to his character. But I found the whole premise, including the denouement, unrealistic – an author demonstrating his intellectual ability rather than a genuine mystery. America is home to any number of seriously damaged killers, some of whom are multiple murderers, but who has ever heard of one offering an individual policeman clues, however cryptic, to their identity? Coming fresh to the Doyle series, I found it all a bit much to swallow.