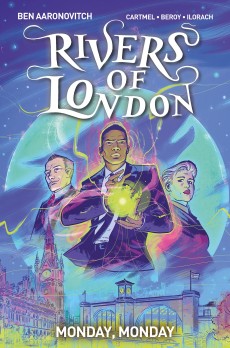 An operation to bust a gang of petty thieves turns into a hunt for a possible werewolf in the latest outing for the Met’s most specialised policing unit, the Folly.

A gang of muggers and pickpockets is causing a headache for the police in central London. When the DI at Holborn nick who’s running Operation Willow, as it’s known, ends up in hospital after a failed attempt to arrest a couple of muggers, DI Miriam Stephanopoulos is landed with the job of sorting out the problem. The team she’s inherited seem to lack motivation and need dealing with almost as much as the gang they’re after. Stephanopoulos doesn’t suffer fools gladly, whether they’re in or out of uniform and she is determined to get a grip on the rag-tag team, including DC Billy Costas, a scruffy detective who looks like a grown up version of the young protagonist from the Just William books.

When Stephanopoulos discovers that all the CCTV cameras covering the scene of the failed arrest stopped working at once, she smells the rank aroma of what she likes to term weird bollocks and designates Billy Costas as Falcon liaison when she drafts in the Met’s smallest and most specialist unit, consisting of Peter Grant and his boss Thomas Nightingale, both magical practitioners who have to deal with the sort of weird bollocks that ordinary coppers like Stephanopoulos prefer to avoid.

From the digging around done by Peter and Billy, it looks very much like they might a werewolf on their hands, which brings back memories for Nightingale of the last time he encountered one in the second world war. As part of these flashbacks, we get to see the young Thomas Nightingale at school, offered a teaching position when what he really wanted was to serve his country in the war. There’s also a glimpse of his relationship as an even younger schoolboy with his friend, the cheerfully bookish David Mellanby. Back in the present day, Nightingale, giving a bunch of new Met recruits a Falcon awareness course, is called out to perform an initial assessment of a crime scene and takes his class along with him to broaden their experience.

In Monday, Monday police work and magic collide as messily as ever, with a plethora of delightful insights into Nightingale’s past and Peter’s chaotic home life. Peter, is the partner of a river goddess and now the proud father of twins. We even get to see Nightingale pressed into service as a babysitter when Peter’s father is rushed to hospital. The twins have their own vulpine bodyguards, a pair of talking foxes with a passion for cheesepuffs. Folly apprentice Abigail Kamara also makes a welcome appearance.

Veteran comic book artist José María Beroy makes his first appearance in the Rivers of London series and for me, he perfectly captures all the characters, giving Nightingale’s saturnine good looks a slightly boyish feel, in keeping with the fact he is now aging backwards and, for a man born in 1900, he now appears no older than his mid-40s. There’s a riotous energy to many of the scenes, particularly the goblin market in Camden where Billy Costas gets his first proper look at the world of the demi-monde. The colours are as strong and vibrant as ever, and the action positively leaps off the page. There were times when I had to back-track occasionally to be sure I was keeping up with the story, but that wasn’t a problem, as there were plenty of details to enjoy that I managed to miss the first time through.

Monday, Monday is an excellent addition to a series that continues to grow, pulling in more minor characters like Billy Costas and the foxes and finding a place for them in an expanding universe that showcases the best of British urban fantasy.