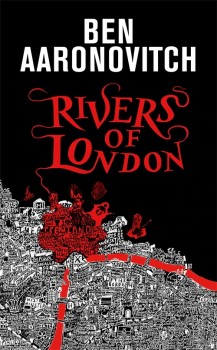 When rookie London copper Peter Grant talks to a material witness to a murder in Covent Garden, he’s not expecting to find himself interviewing a ghost, and he certainly doesn’t expect anyone to believe him, but then Peter’s career takes a sharp turn in an unexpected direction.

To mark the 10th anniversary of the publication of Rivers of London, the book that almost singlehandedly relaunched the supernatural crime genre in the UK, Gollancz have brought out a special, hardback edition containing an illustrated map of Peter Grant’s London on the inside front and back covers and several moody black and white illustrations that very much fit my own mental picture of the characters, although this is an area where mileage will always vary.

For those coming new to the series, Peter Grant is a lowly London copper who aspires to be a detective but seems destined to be side-lined into a boring job pushing nothing more interesting than a pen around a desk in a grotty nick. The most interesting thing to happen to him so far in his career is the discovery of a body near St Paul’s Church in Covent Garden and the search for an evidence bag big enough for the head, found separately, naturally. Left on his own in charge of a cold, miserable crime scene in the middle of the night, while his partner, Leslie May goes off to fetch coffee, Peter encounters a material witness. Or, more accurately, an immaterial witness, as the witness in question happens to be a ghost.

Not one to be deterred by the minor matter of a dead witness, Peter promptly launches a ghost hunt, aided and abetted by Leslie, and when he takes a chance and confides in a senior officer at the crime scene what he’s up to, his career takes an abrupt lurch sideways into the arms of the Met’s smallest policing arm, the Specialist Assessment Unit, aka the department that deals with weird shit, run by DCI Thomas Nightingale out of the Folly, an imposing building near Russell Square Gardens. It’s certainly all a cut above Charing Cross nick.

Rivers of London and the subsequent books are narrated by Peter in a wry, amusing style as he struggles to come to terms with what fellow officers often term weird shit, codenamed Falcon cases. Peter is young, occasionally reckless, and keen to learn, even though magic carries inherent risks to practitioners. Magic has a nasty tendency to blow up mobile phones and other electronic devices. There’s also the risk that you’ll fry your own brains, and they’re somewhat harder to replace than a mobile or a standard police-issue Airwave radio.

Peter is thrust into a world where magic is real and the Thames has its own goddess, a nurse who tried to commit suicide by throwing herself into the river and emerging as a somewhat puzzled but powerful water deity. Each of the rivers has their own supernatural being, as Peter comes to learn.

The story is a fun, clever police procedural, with great characters, particularly the suave, saturnine Thomas Nightingale, a man who appears to be in his early 40s, but who was in fact born in 1900. After reaching his mid-60s, Nightingale started to age backwards at an unspecified rate for an equally unspecified reason. His dry humour makes him the perfect foil for Peter’s sassy outlook on life and the two work well together. Their relationship is very much at the heart of the books and Peter looks up to Nightingale as a friend and mentor.

It's easy to see why Rivers of London became such a hit. The series is as sharp as a broken bottle wielded in a fight in a grotty East End pub, the books are thoroughly grounded in the real London, with recognisable places that anyone with even a passing knowledge of the capital will recognise. In addition, pounding the pavements with Peter will take you into little known highways and byways where it’s all too easy to believe that magic is real.

If you haven’t yet gone out on the beat with Peter, then start here, at the beginning, and after this, you can look forward to seven more full length books, three novellas and eight graphic novels, all of which expand the original canon into a sprawling cast of magical and non-magical characters in a world that straddles both the familiar and the unfamiliar. And if you’re not sure whether magical realism mixes with policing, check your scepticism into the evidence locker and jump straight in. You won’t end up as a river goddess but you will end up – like me – with less space to spare on your bookshelf.