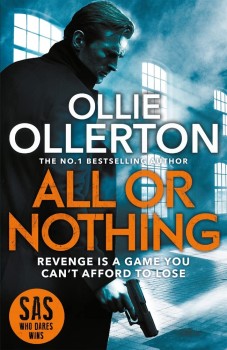 After years of not knowing what really happened, ex-special forces soldier Alex Abbott finally has a credible lead to the truth about his brother’s death when they were both children, a lead that takes him to a dangerous undercover role amongst some very nasty people.

Former special forces soldier Alex Abbott has enough angst to over-fill an army-issue Bergen on a tromp up Pen y Fan. His marriage hit the rocks a while ago and his ex-wife is now happily remarried to a man who acts as Abbott’s occasional friend and back-up. Abbott’s got a drink problem, which ticks one of the classic stereotypes immediately, although he claims he can lay off the booze when he goes into actions, and that ticks another box.

He’s also got a mystery in his past, a brother who died young. Abbott’s parents always refused to talk about this, fobbing a distraught young Alex off by saying that his brother’s body was washed out to sea after he fell into a river in Derbyshire. The geographical absurdity of this seems to have taken a long time to hit him, so when he gets new information about his brother’s death, Abbott jumps in with both feet.

His quest for the truth leads him to go undercover with a criminal gang, impersonating an enforcer to get close to the men at the top. But the top goes a long way beyond just a northern gang and as he delves deeper into the past, he uncovers a web of depravity still all too active in the present.

In his first outing in Scar Tissue, I found Abbott and his numerous flaws irritating and unprofessional, mainly because he was meant to be doing a paid job, rather than striking out on his own, and so in All or Nothing, he was more appealing, as he’s motivated by the need to solve a personal mystery, rather than just turning into a loose cannon. He’s resourceful, loyal and (sort of) moral, although those morals are distinctly flexible where the bad guys are concerned, and in this instance, guys is a gender-neutral term, as some of the baddies Abbott goes up against are women. And the women are every bit as dangerous and immoral as men.

The story was fast-moving and felt grounded in a sordid reality that was all to real for comfort, but then the book took a sharp left turn into a decidedly odd, albeit entertaining, gladiatorial style combat somewhere in Eastern Europe, with not only Abbott’s life hanging in the balance. The big question that runs throughout the book is whether Abbott has lost the edge that made him so deadly in the field, and that question remains unanswered almost to the last page.

I think Ollie Ollerton has hit his stride in Abbott’s second outing, and if he can only manage to keep his character off the booze, Abbott and I will get along very nicely, and I might even end up adding him to the list of fictional characters I’d be happy to have fighting my corner if things turned nasty.