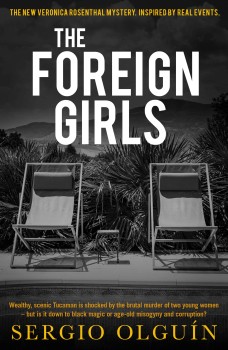 On a break in the north of Argentina, Buenos Aires journalist Veronica Rosenthal is determined to find those responsible for the rape and murder of two foreign girls she befriended.

Buenos Aires journalist Veronica Rosenthal first appeared in The Fragility of Bodies, in which she exposed the activities of the rich and corrupt using boys for entertainment. A loose end from that adventure is Three, a contract killer who has been sprung from the prison where he was due to serve a long term, and who has Rosenthal’s death as his first priority.

Finding that she has taken a vacation in the north he spies a useful opportunity and follows her to put his plans into effect. Rosenthal has by chance met two girls, an Italian and a Norwegian, of similar age and adventurous spirit. After a few days they attend a party together. Veronica leaves early with a man she finds attractive. The two foreigners are not seen again until their bodies are found by the roadside three days later. Both have been raped.

Sacrificial offerings at the scene suggest a direction for the police investigation but when this peters out it is clear the authorities are unlikely to make much progress. Rosenthal is better motivated and begins to unpick the chain of events that led to the murders. With at least two sets of enemies after her, however, and a tendency for precipitate action, her chances of survival look improbable.

As with Rosenthal’s previous outing, the crimes at the centre of the book highlight certain aspects of Argentinian society, in particular the great disparities in wealth and influence. Institutions are weak and those from the privileged section of society regard themselves as above the law. Women are objectified and are vulnerable. Many of those active in the worst offences against human rights during the period of dictatorship are still around, enjoying political protection.

Ironically, Rosenthal comes from a rich and influential family herself, and it is evident that without that protection she would not have survived as long as she has. She flails around exploring any avenue which promises progress, provoking the ire of those who will swat her without compunction. Even with off-and-on boyfriend Federico keeping an eye on her and her famous lawyer father using his influence, her penchant for putting herself in danger is alarming.

In fact, it is her impulsive behaviour that makes Rosenthal such an intriguing character. The abandon with which she throws herself into love affairs, with both sexes, and her compulsion for immediate confrontation with foes, and her habit of acting instinctively, is breathtaking. She is not a protagonist that many readers are likely to identify with, but at the same time it is difficult to look away. This is a gripping tale that barely pauses for breath.