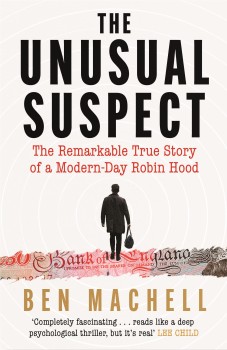 The true story of a would-be Robin Hood, a man who robbed banks and betting shops, and for an impressive time managed to evade capture.

This is the story of Stephen Jackley, a young man whose concerns about economic unfairness and climate change led him to commit a series of robberies. He dreamed of a big score that would enable him to set up ‘The Organisation’, and fund programmes to address world poverty and ecological catastrophe.

Ben Machell interweaves two parts of Jackley’s tale: his upbringing and the development of his thinking and activities up to the date of his capture, and his experiences when arrested in the USA following an attempt to purchase a gun in Vermont. It was only following the latter, after enquiries from US to UK, that enabled British police to solve a long list of unsolved crimes.

Jackley began his life in south-west UK, the only child of a couple who had their own psychiatric problems. As a result, Jackley came in for considerable oversight by various agencies and it therefore seems a little surprising that his Asperger's Syndrome was not diagnosed until his crimes brought him special attention. It was nonetheless appreciated by some teachers that he was different; he had few friends, and he was socially awkward.

He was intelligent, however, and kept a diary which demonstrated a lively mind, a love of nature, and concern about the mess that humans are making of the planet. The 2008 banking crisis suggested a particular villain, which made him select banks as being an appropriate target.

Jackley eventually committed about a dozen robberies. He made detailed plans and provided multiple escape routes which foxed police, but at the same time much of the execution was amateurish, hampered in some instances by his difficulty in recognising emotions in those he faced in his exploits.

This aspect of his behaviour also made it difficult for him to appreciate the traumatic impact his activities had on some of those he threatened during the robberies. Conversely, the police agencies had little understanding of him, and for someone with Asperger's the impact of the US penal system must have been severe. Jackley’s tendency to answer questions with the unvarnished truth did not help him in this respect.

Machell paces the book well and left me with sympathy both for Jackley himself and for those who were adversely affected by Jackley’s activities. For someone who finds it hard to relate to others it is easy to imagine how lonely a sufferer could be. His concerns about the world are of course bang on; if only one could do something about it by so simple a recourse as robbing banks.

Jackley spent his late teenage years in Sidmouth, which his one childhood friend describes as ‘a cemetery with street lights’. Anyone with familiarity with that part of the costa geriatrica will sympathise.