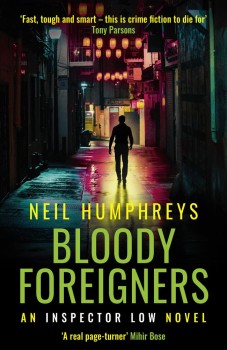 A racist attack in London’s Chinatown challenges local police, but luckily the brilliant, troubled, Singaporean DI Stanley Low is in town to help.

Stanley Low is a brilliant detective who worked undercover in his native Singapore to bring down a crime syndicate. However, he is bipolar and difficult to work with, and his bosses were happy to send him off to London on a lecture tour.

Soon after his arrival, a Muslim student is stabbed and killed in an alley in Chinatown. The acronym MBGA (Make Britain Great Again - the slogan of a racist group) is left nearby. The case falls to DCI Wikes at Charing Cross, and his subordinates DI Mistry, of Indian heritage, and her husband, DC Devonshire. Low and Mistry once had a relationship so the three get together to discuss the case.

Low’s insights help them to make progress with the murder and with subsequent developments, Wikes assents to Low’s informal involvement. It is apparent that someone is trying to generate racial tension with a view to provoking civil unrest. The topic is thoroughly aired in a popular radio programme where two pundits argue opposing views, and they are also threatened with violence.

The villain of the piece wears a Winston Churchill mask to conceal his identity and leads the police on a dance as his activities escalate. Low manages to out-think his foe, but it is unclear whether Low will manage to circumvent his intentions in time. Even when the matter seems to have been resolved, there are some surprising twists.

Low is an interesting character, although given his abrupt changes in mood and behaviour Wikes’ ready absorption of him into the team does seem surprising. Possibly the fact that Wikes is near retirement gives him a little more leeway. A glossary of Singlish phrases is given at the end to give readers the flavour of some of Low’s more pithy sayings. He makes some comments about mixed-race communities in his hometown which show that friction is not confined to a UK context.

The exploration of the general theme of immigration is very expansive. A character called Billy Evans appears from time to time, the public face of MBGA. Evans is portrayed as a cynical exploiter of those who feel left out of life’s benefits. The two radio pundits, Beckett and Jones, exchange commonly held points of view on the topic in a robust debate. There is however little doubt about the author’s views on the matter.

A Singapore detective is an unusual character in a British context; those that have visited Singapore will have observed how much it is controlled and regulated, and a loose cannon like Low is unexpected. The book is all the more interesting for that.