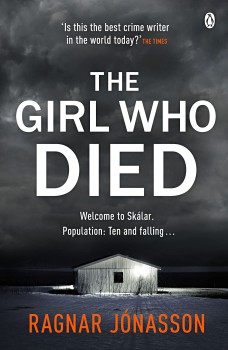 The Girl Who Died

A young woman from Reykjavik answers an advert to work as a teacher for two girls in a remote village. Amidst hostility, recurring nightmares and visions of a ghost she tries to find out what’s been happening in the area, but the locals will do anything to protect their secrets.

The Girl Who Died, a standalone thriller from Ragnar Jónasson, features a young woman called Una, quite unhappy, disillusioned, and sad. Although she loves to teach, she’s lonely in the city and can’t secure steady employment in Reykjavik, she lives alone in a shabby apartment, her social life is very limited and her love life non-existent. She wants to start anew, sort herself out and shake off painful memories of a traumatic family event. She replies to a newspaper advert simply saying: ‘Teacher wanted at the edge of the world’. Una hopes that moving for several months into an isolated community, keen to employ a teacher for two girls, will be an opportunity to make new friends and maybe even feel like she belongs somewhere. So, she leaves for the unknown.
Arriving at a location that might be stunning in summer but seems inhospitable at the outset of winter, with the days getting shorter and weather turning colder, she takes her job very seriously and prepares for Christmas. However, only Salka, who arranged the job for her and offered her an attic flat in own house, seems to be pleased to see her and interested in Una. Salka is also the mother of seven-year-old Edda, one of the pupils.
Others are not so welcoming, and apart from Thór with whom Una feels a connection, interactions are distant or superficial to say the least. In the evenings, Una seeks solace in books and wine. During the nights, however, she hears twinkling on the piano and a sad lullaby, and sees a girl in a white dress. Initially unsure whether her experiences are real or not, Una also worries that maybe she’s conjuring the images out of an increasing sense of unease and claustrophobia. Then the sudden unexplained death of young Edda during a Christmas concert makes the situation even worse.
The oppressive atmosphere is of impending doom and unsettling darkness, and after a while Una is not sure whether she imagined the ghost and is both keen and reluctant to bring this subject up in conversation with other people who seem to grow more reluctant to discuss anything to do with the past. Eventually it becomes clear that the villagers deal with any problems in a specific way and will do anything to protect their secrets, as there’s no point in involving the police in a case of poisoning or murder.
What makes this story so frightening, with its haunting mood and many unanswered questions, is the introduction to the remote area. In reality, Skálar on the other side of Iceland was already a ghost village from the ‘50s, abandoned and left to its memories. In this story set in the ‘80s, a tiny community still keeps going, with several houses, the remains of a thriving fishing business, one church and one shop, with ten people who will finally decide Una’s fate.
The Girl Who Died, translated by Victoria Cribb, brings the best of the Iceland, both dark and cold. Ragnar Jónasson honed his writing craft on the locked room concept, first translating Agatha Christie’s novels into Icelandic. This time he takes it one step further and delivers a masterclass in locked village mysteries. Prepare to be spooked.