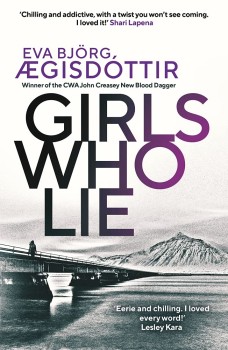 When a feckless single mother goes missing it is assumed that she has committed suicide. But then a decomposed body is found seven months later hidden on the lava fields of the west coast of Iceland and police officers Emma and Saevar find themselves heading up a gruesome murder investigation.

This story, set in Iceland in the small towns that dot the west coast above Reykjavik, is the second in a series featuring a sympathetic central character: Police Officer Elma (I’m not sure if we ever learn her surname). Elma's long-term partner, David, has committed suicide and that led her to abandon life in Reykjavik and seek out a lower key existence in her childhood home of Akranes. She is now involved with a neighbour in her block of flats (a 'friend with benefits' situation) but she also has a will they/won’t they thing going on with her older police colleague, Saevar.

It seems that not many murders are committed in Iceland and so when single mother, Marianna, disappears, abandoning her 15-year-old daughter, the assumption is that with her history of drink, drugs and depression she has committed suicide. But seven months later a body turns up, hidden in the lava fields of the west coast and Emma and Saevar find themselves leading the hunt for a murderer. The body is decomposed so there isn't a great deal of forensic evidence, and no obvious suspects.

For two thirds of the book the action tootles along and seems to be going nowhere. Of more interest, and the driving force behind the story, is the intermittent first-person historical account of a teenage mother who is struggling to bring up a daughter alone and unsupported. Snapshots from birth to adolescence detail a complex and occasionally harrowing relationship. One which it is safe to assume has a direct bearing on Marianna's disappearance and subsequent demise.

The story hots up when the police spotlight shines on Marianna's daughter Hekla, and then Hekla's friend Tinna and her mother Margret. This story is really the tale of two mothers, Marianna and Margret, and two daughters, Hekla and Tinna. Girls Who Lie. But the question that needs to be answered is which ones are the liars?

The author cleverly twists and turns the truth of past and present right up to the last few pages. And after the mystery is at last resolved there’s a final chapter where we see Emma and Saevar as perhaps more than just colleagues – possibly. That was enough to make me go back and read the first book in the series and I’m looking forward to the third.