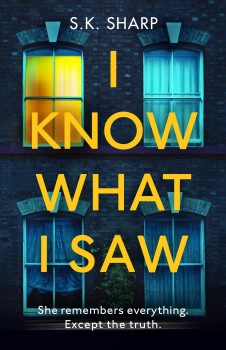 I Know What I Saw

Nicola may not be able to forgive her ex for his affair, but she won’t watch him go down for a murder he couldn’t possibly have committed.

Hyperthymesia is a condition that leads people to be able to remember an exceptional number of their experiences in vivid detail. Not as if it happened yesterday, but almost as if they are re-living it. Even if the memory is from 35 years ago. Nicola Walker has this condition, but she doesn’t consider it a gift. Although it does help in her work in the British Library archives.

When the body of a man missing for over three decades is found, Nicola receives a phone call from the man’s son. Her ex-husband. He has been brought in on suspicion of his father’s murder and needs her at the police station to tell the detectives where he was on the night his went missing.

Nicola knows Dec didn't do it. The timeline is all wrong, and he was with her when his father disappeared. Wanting to see justice done rather than seeing the look of disdain on the detective’s face, Nicola starts her own investigation into what happened to Arthur Robbins on the night of his birthday party.

The trouble is, she is about to learn that remembering everything does not necessarily mean she has interpreted what she saw correctly. And there are pieces missing; events, whispers and facts that she wasn’t party to at the time. Everyone around her becomes a possible murderer in her eyes as her unfailing memory blends with people’s selective memories and strange reactions and she uncovers more secrets than she knew existed.

Although this is an easy read, the huge swathes of introspection and repetition bog it down. Trimming would have helped it fly without losing any of the meat and bones. Of course, the reader would like to sense the uniqueness of a character with hyperthymesia, after all, there are only about 60 people in the world with this condition, so it really is a USP. But rather than an insight into her exceptional ability, Nicola’s thoughts fill the page with irrelevant ramblings that just confuse. On top of that, there is a lack of suspense in the mystery, and no real sense that Nicola is ever in danger. Yes, there is a vague clock ticking, but not enough to feel any build up of high-voltage pressure.

I should have loved this. There are not that many books where the female main characters are in their 50s. Nicola is one of those rare birds, but unfortunately, she still acts like she's a self-absorbed teenager. She goes into things blind, doesn’t think things through, and certainly doesn’t think about the consequences of her actions, less still the effect she has when she opens her mouth. I found it difficult to connect with her and her attitude towards her best friend didn’t endear her to me either. That said, I did find her teenage character extremely convincing, and took my hat off to SK Sharp – otherwise known as Stephen Deas – for that.

There is a large cast of generic characters filling the pages, which made it difficult to distinguish between them in places. Sometimes I even had to flick back to check who they were. I found the ending weak, rushed and convenient, with some loose ends and far too many red herrings. This is an easy read, more than feasible to gallop through in one sitting.