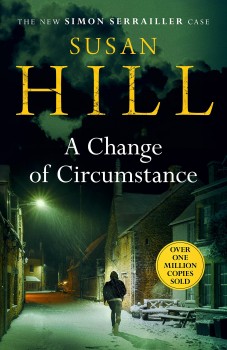 A Change of Circumstance

Susan Hill likes to ring the changes in her Lafferton series with a different type of criminal activity, as well as fresh developments in the ongoing Serrailler family saga, in each new instalment. This time out she takes on county lines and the ripples of a drugs network that spreads out as far as the sleepy villages in Detective Chief Superintendent Simon Serrailler's patch. Her subject matter, as always, is carefully researched. Her description of how innocent lives can be gradually corrupted by those wicked enough and desperate enough to do that, is perfectly credible.

DCS Serrailler has been aware for some time that there is an underlying drugs problem in prosperous Lafferton and the surrounding villages of Bevham and Starly. But when the dead body of a young man is found in filthy surroundings, a hypodermic syringe hanging from his bruised and wasted arm, Simon decides that it is time to tackle the issue head on.

The action cuts between Simon and his personal dramas and the contrasting lives of two vulnerable young Starly kids who are being exploited by ruthless drug runners. The way in which lonely and neglected youngsters can be singled out for attention, designer gifts, mobile phones and finally terrifying threats is convincingly portrayed.  And this can only lead to tragedy – which it inevitably does.

Meanwhile the Serrailler family saga continues. Simon has split from his current lady friend but continues to fret about whether he has made the right decision. He is considering leaving his pristine bachelor flat in Cathedral Close and frets about that too. His sister, Cat, in contrast enjoys a messy farmhouse family life complete with her second husband (Simon's boss), three children, a demanding job and an injured dog. And there is a difficult grandad in the background too.

This series won't appeal to everyone. I am a fan but I can see the flaws. The Serraillers are posh. This is the 11th in the series and Simon must now be well into his 40s, but he still acts like a spoilt minor public schoolboy. Cat's first husband was a passionate supporter of the NHS but he has been written out leaving Cat to pursue her career in private medicine and write letters to the Department of Health about the shortcomings of Bevham General Hospital. Some of this grates. Simon is unfailingly polite, courteous and sensitive when dealing with the great unwashed – but he is a little condescending too. He’s the same with Cat, his sister and confidante. She initially had a bad conscience when she abandoned general practice but now seems quick to judge when her rounds take her into the public sector.

Susan Hill is a realistic writer, and we are never led to believe that these drug runners will be driven out of town for good. But some arrests are made, and some suitably violent retribution is dealt out. Family threads are left dangling for another day. Simon is contemplating a huge change of circumstance and his niece, Hannah, has announced a massive opportunity in her chosen career.  But in both cases, alarm bells are ringing. So, the saga will continue …