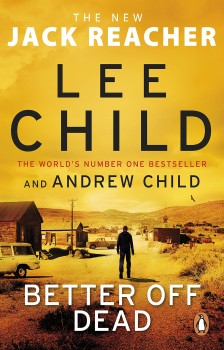 A crashed jeep against the only tree in sight in the desert landscape of Arizona feels suspicious to Jack Reacher and, as ever, he gets involved.

Jack Reacher, an ex-military policeman, happens to be walking into an unknown town in Arizona when he comes across a very old jeep that appears to have crashed into the only ancient, gnarled tree in sight. Slumped against the steering wheel is the body of a woman.  Reacher investigates and it turns out she’s an army vet, very much alive, but, in trouble. As ex-army himself, Jack Reacher has to help Fenton. It appears that her brother, Michael, is in trouble too, and she thinks she is going to be rescued by someone who knows him. When this turns out not to be the case, Reacher and Fenton hatch a plan to try to find him.

The story involves bombs and chemical weapons, all the province of a man known as Dendoncker and his heavies. Dendoncker has a strange desire to see the dead body of anyone he or his men kill. Fenton believes that her brother is somehow involved with Dendoncker, and so the search begins.

The plot makes sense but, as always, concentration is needed in order to follow all the technical information, particularly at the end when all the loose ends are being tidied up. Reacher encounters numerous thugs throughout the story, all trying to take him down.  As ever, the fights are described in very precise detail, down to each individual part of the body that is put out of action. But some thugs, particularly a man called Mansour, seem to recover and bounce back into action, ready for the next chapter, as though nothing had happened. The detail of the moves in each fight has a kind of mathematical beauty, often symmetrical, and flowing, and nearly always ending with Reacher on top of the situation. Similarly, the descriptions of the locations are meticulous.

To begin with, these do an excellent job in creating a picture of events: the crash site of the car and the ditch in which Reacher hides; the motel where entry and food are only possible through some kind of complicated technology; the house on the edge of town with the hole in the floor; the tunnel under the desert. All these descriptions help build both an accurate picture of the location and also provide a sense of atmosphere, usually building up fear of what seems to be about to happen. The final location however is a seemingly symmetrical building and the description begins to feel somewhat pedantic, despite possibly being thought necessary in order to highlight the small differences in the two halves. In this section the plot begins to feel a bit stretched, relying too much on precise description and obscure technical detail.

Overall, Better Off Dead is not quite as engrossing as some of the earlier Reacher books, but it’s still an acceptable, easy read.