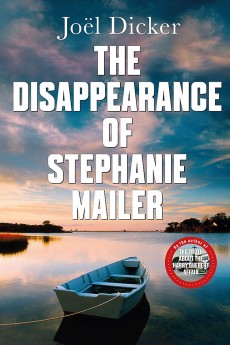 The Disappearance of Stephanie Mailer

An investigative journalist approaches a retiring police captain and suggests he got a 20-year-old case very wrong. Then she is murdered and the team re-investigates the earlier crime, as well as her death.

I haven't read Swiss author Joël Dicker’s earlier book, The Truth about the Harry Querbert Affair, nor any of his other novels. Despite being widely acclaimed, that book was apparently also regarded as being one of those oyster novels — you either love them or hate them. The situation here is probably not dissimilar.

The Disappearance of Stephanie Mailer was originally written in French and is set in Orphea in the Hamptons, in the state of New York.

In 1994, the mayor and his family, together with a local jogger, are murdered. Jesse Rosenberg and his partner, Derek Scott, were the investigating officers at the time and were widely applauded for identifying the murderer, Ted Tennenbaum. Tennenbaum died a short time later.

In 2014, Jesse is about to retire and is described as Captain 100% as he solved 100% of the cases he was involved in. He is approached by Stephanie Mailer, who is investigating the murders and refers to Jesse as Captain 99%. Jess is bewildered by the reference, but Stephanie explains that he and Derek got it all wrong back in 1994, despite the real story being right in front of them. She holds up her hand and asks Jesse what he sees. He replies that he sees her hand and she retorts that she was actually showing him her fingers. She adds that just as in 1994, he didn't see what was right in front of him. A short time later, Stephanie is murdered, and the story focuses on finding her killer and re-investigating the 1994 murders.

It is important to note that in both the 1994 and 2014 timelines, a community play is being held. The police chief in 1994 - who doubles as a playwright and disappeared for 20 years - returns to Orphea with the promise of revealing what happened in 1994, but only during his play. Much of the book is therefore spent in countdown mode, waiting for the play to air. I couldn't get my head around the idea of the holder of seemingly crucial information being allowed to dictate when it would be released. Surely, the police should have hauled the former police captain in and insisted he spill the beans. And then there’s the many security issues the delay in the release of information could potentially cause.

Dicker adds thread upon thread and I admired how very much in control of the story elements he appeared to be. There is, therefore, quite some brilliance in the way the story is put together.

The book is very long, though, at nearly 600 pages, and herein lies its biggest problem. That length can hint at editing issues, and we certainly have them here. The list of characters is extremely long but, of itself, that is not a major problem as characters are progressively introduced and not dumped on the reader at the outset (a list of characters appears at the end of the book, but many would argue it would have been more helpful at the front).

The bigger issue is the number of red herrings and the rambling information that adds nothing to the storyline. The problem is worse towards the end as more and more personal backgrounds are detailed, without adding anything to the story or enhancing any understanding or appreciation of the characters.

The story is told in first and third-person accounts, both in 1994 and 2014, but all are delivered smoothly and without impacting enjoyment. A translated novel can sometimes create a challenge, raising questions as to whether the translator has remained faithful to the original, and whether the book has been improved or diminished by the translation, but I couldn't fault Howard Curtis' translation.

I was reminded at times of Larsson's Millennium trilogy and Holt's superb Carnivia books and wonder whether multiple volumes would have served the story better. On balance, though, there was probably not enough plot here, nor were there any interim conclusions to close more than one volume.

In many ways, this is a fascinating, brilliant, and mesmerising book, but it is also a long and frustrating one. At different times, it both impressed and irritated me. Oysters, anyone?