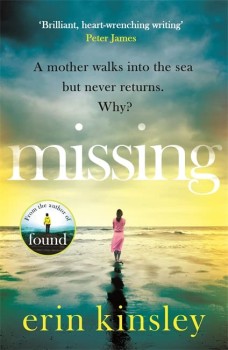 Two sisters reunite to sort out their mother’s legacy - and her death. They couldn’t be more different, and as they discover more about their parent, it’s not clear whether they’ll be drawn together or pushed further apart. Then a police investigation into a cold case murder complicates things further.

Marietta is far from home, working in a South American bar when she takes a tearful phone call from her sister, Lily. Their mother has apparently walked into the sea by her Cornish home and drowned. So Mari finds herself back at home again, faced with her near-hysterical sister who is floundering in a what-to-do-next state of turmoil. Mari was the wanderer, who left home young, determined not to be mired by familiarity and ordinariness. Footloose, she has travelled and experienced life without a thought for her mother or sister for years. So returning to the family home and being forced to face up to everything she needs to catch up with is a shock.

Worse is to come as their mother seems to have committed suicide and sensible, sweet, grounded Lily can’t bring herself to believe it. But as they dig into their mother’s past, and find more people who knew her, the complications arrive like bees to a hive.

In a parallel strand to their story, the soon to retire DI Russell Fox is given a cold case to investigate. Very cold, in fact, very cold and old. A baby’s body was found in a copse, his tiny form thrown onto a makeshift bonfire. There are no clues and no suspects, so Fox must start from the very beginning and hope he does better than those who investigated before him.

There don’t seem to be connections between the sisters and Fox but there is a sense of inevitability about the parallels changing perspective and being drawn together.

This is clever, tender writing. Erin Kinsley provides quite separate characters who grow and mature naturally as the story shifts around them. There is sympathy for Lily, who is desperate to have a baby and who is hard hit by the cruelty of the murder, and for Mari, who softens as the story unfolds, and who thought she would never settle or find a partner for life. DI Fox is also his own, careful, precise person – a policeman both human and coldly efficient.

Together the sisters ride the shocks of discovery – not only about their parent, but about their own values and needs; but it is Fox who trudges on and brings all the strands together.

Missing is a glorious, engulfing and totally satisfying read.