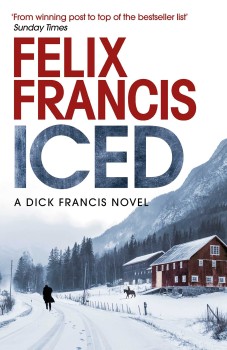 Miles Pussett is a former steeplechase jockey but he now gets his adrenaline rush from hurling himself, head first, down the Cresta Run. Finding himself in St Moritz during the same week as White Turf, when horseracing takes place on the frozen lake, Miles gets talked into helping with the horses but something suspicious is going on …

Miles Pussett is a former steeplechase jockey, but he now gets his adrenaline rush from hurling himself, headfirst, down the Cresta Run. Finding himself in St Moritz during the same week as White Turf, when horseracing takes place on the frozen lake, Miles gets talked into helping with the horses. Something suspicious is going on in the races, and Miles begins to search for answers... Someone is adamant to stop him, and they'll go to any lengths to achieve their objective.

Iced has dual threads. In present day, it follows Miles Pussett, ex-jockey, as he rides the Cresta run, an ice toboggan track in St. Moritz. In the past, we learn of Miles' childhood, with the tragedy of a car accident in which his father dies, and later his mother's suicide, and then the start of his riding career.

As the book progresses, in Switzerland, Miles bumps into characters from his past at White Turf, a horse racing event held on the ice of the lake at St Moritz. Despite his better judgement, he helps with the horses and uncovers some shady happenings. At least, I think that was in the present. And on one of his Cresta runs, an object placed on the track causes him to crash. There’s also more about his past and why he gave up steeplechasing.

Questions quickly arise about who tried to kill him and why, and whether it has anything to do with his past, or what he discovered at White Turf.

I think I might have accidentally made Iced sound more exciting than it is. Perhaps the early James Bond reference should have alerted me to the desperation to make the book interesting. I was even fooled into thinking it was nice to read about some of the racecourses in the north of England, as it did make a change.

But fairly quickly, I discovered I did not like Miles Pussett. He sees an elderly lady in diamond earrings at a party and all he could think was that the jewels were to distract from her ageing face. You, Miles, are not nice, with no excuse allowed by whatever tragedies your past has held. And his life does have problems. I'm just not sure I wanted to read about them in such detail in a book that ought to be a crime drama.

Reading about the Cresta Run, and Miles' early life was vaguely, but it took a long time for anything to happen that belongs in a crime or thriller novel and at the end of the relevant chapter there is a little blood. But that’s about all, and there is no drama or anything noteworthy. I cannot emphasise enough how little happens in this book. One chapter is more of a history lesson about northern racecourses and I felt inclined to shelve this in the non-fiction category.

I almost got excited at one point when Norman, the head travelling lad, was mentioned and felt that surely such a character could bring some mystery and intrigue to the story. Sadly, he didn't. By the end of the book all we know is that Miles Pussett is very much a danger to himself and others. The story is not amusing to read. There is no investigating, no clues, no sleuthing and to top things off, Miles’ final act is unconscionable.

Despite all this, Iced was a readable enough book; Miles and his past and present were tragic and distracting, but not exactly enjoyable. And without much of a plot to hang the one incident on, I’m sorry to say it just fell at every hurdle. I've disliked Felix Francis’ protagonists before, they are not kind people, and I'm beginning to conclude I'd rather not read about them. Miles Pussett gets no pass for his illnesses; he simply doesn’t come over as very nice. If anyone can point me to a Felix Francis protagonist I would like as a person, do let me know.

Iced. It certainly left me cold...