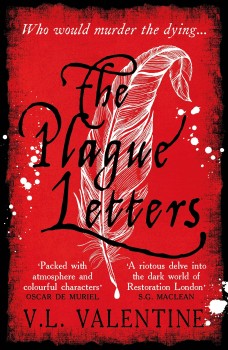 With London wracked by another major plague outbreak, Rector Symon Patrick sets out to track down a medical man using plague victims for his warped experiments.

Sooner or later some ambitious author was bound to note the similarities between life now and the last major pandemic – the plague of 1665 that rocked Restoration England to its core, saw London in a total lockdown and killed an estimated 100,000 of the city’s half-million population.

VL Valentine, a senior science editor on the Washington-based National Public Radio has experience of reporting on Ebola and the Zika virus as well as COVID-19. She introduces the all-too-familiar figures of plague deniers and sceptics and the get-rich-quick quacks peddling miracle cures for an infection no-one – given the shortfalls of 17th century medicine – understands.

Her riotous exploration of the dark world of 17th century London is packed with atmosphere and eccentric characters. It may be historical fiction, but it’s like reading recent headlines. While the similarities may shock, first and foremost it is a very well written novel with a murderously dark twist.

Symon Patrick, rector of St. Paul’s Covent Garden – a parish church not two miles from the great Cathedral – is well meaning, kind and sympathetic, but frequently ineffective. He’s a man who finds its easier to express himself in writing than in speech. When he returns from sick leave to find the body of one of his own servants amid a growing pile of plague corpses in his churchyard, he’s horrified. The girl is bound hand and foot, her blonde hair has been cut off and her body is covered in burns, bruises and strange signs.

More victims, all similarly mutilated and showing the same evidence of torture and murder, start to appear and it becomes clear that a serial killer is using dying plague victims for their own ends.

Faced with the question of who would even want to murder the dying, Symon joins the strange Society for the Prevention and Cure of Plague, a group drawn from all the medical professions. Its members are, to say the least, eccentric, each advancing their own half-mad theories motivated by either a search for fame or just plain greed, each man more jealous, more peculiar and splenetic than his neighbour.

It soon becomes obvious that someone in this ambitious, morally bankrupt and cold hearted group is using the cover of just one more corpse amidst so much death to cover up their activities – but the problem is discovering which one.

Symon blunders on, partly distracted by his hopeless infatuation with Lady Elizabeth Gauden, a married woman, slowly becoming all too aware that few are willing to take his warnings seriously. He is backed, most would say led, by the feisty and mysterious Penelope. She’s a warrior woman who stands hands and shoulders above the men, dresses like a tramp, has a mind like a rat-trap and the education to rival any academic or professional.

The book is well researched, peppered with observations from Samuel Pepys’ famous diary, and illustrated in a way that’s worthy of any prime ministerial press conference, based on the weekly parish-by-parish Bill Of The Dead, using maps drawn by the great Czech artist and etcher Wenceslaus Hollar. The Plague Letters is filled with horror, human decency and a strange dark humour. The characters are memorable, if not in many cases likeable, and there’s plenty of tension.