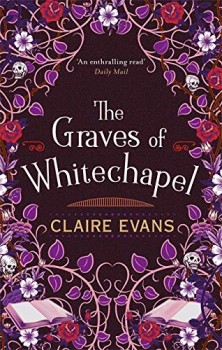 The Graves of Whitechapel

Five years after lawyer Cage Lackmann defended a man against a murder charge, a body is found bearing the same hallmarks – and Moses Pickering, the former defendant, is missing. Lachman must prove his former client’s innocence and salvage his own ruined reputation.

In Victorian London, Cage Lackmann gives a whole new meaning to the words ‘criminal barrister’. Wholly owned by Slavic gang boss Obediah Pincott, he exploits the power of words. Stories are his business. His understanding of stagecraft, inherited from his actress mother, has served him well in court, where he has no problems manufacturing evidence or witnesses to win acquittals for Pincott’s thugs and murderers.

Like many down-at-heel so-called gentlemen of the late Victorian age, he has a pronounced liking for good claret and takes his pleasure with sex workers, of whom there are many in the infamous east London borough of Whitechapel where he lives and works.

But Lackmann is not entirely bad and is becoming more disgusted with a life based largely on lies. Five years ago, he successfully defended harmless book illustrator Moses Pickering against a charge of what appeared to be the deviant homosexual murder of a 15-year-old boy. At the time, Lachmann was convinced of his client’s innocence because of careless police work.

In doing so, he made a lifelong enemy of the detective in charge of the investigation and a public reputation for himself as a crusading defender of the innocent. A poem he published at the time also earned him the nickname of The Poet of Whitechapel.

When another young boy’s body is found wearing a wig and women’s clothes, the hallmarks of the Pickering case, and the illustrator himself suddenly goes missing, Lackmann’s reputation is called into doubt, his colleagues in the legal profession shun him, and clients who had once sought the acclaimed lawyer disappear.

Worse, Jack Cross, the detective who led the failed case, manages to implicate him in the new murder. To prove their innocence, Lachmann must find Cage. An increasingly desperate search takes him back to the past, to his former lover, a woman he never thought to see again, and into a warren of lies and betrayals stretching from the wealthy mansions of Holland Park to the filthy, poverty-stricken, criminal infested dens of Whitechapel, where heartbreak, revenge – and a killer – wait for him.

The Graves of Whitechapel is dark, full of despair and surprising twists. Lackmann is a man haunted by his own dishonesty and also by his love for the married Emma Kenward, whom he had abandoned. He becomes obsessed by the ghost of Baxter Spring, the second victim and the boy poet who wrote the verses that have become the title of the book, determined at any cost to find his killer.

Evans pays a great deal of attention to detail and historical accuracy in a story of love, revenge, the death of hope and joy, betrayal, murder, and a time where dreams are easily bought. Her protagonist is complex and it was impossible not to be drawn into the dark shadows that shroud Lackmann as he fights penury and prison, searching for emotional truths.

This relentlessly dark murder mystery looks at the different shades of morality – a black hole of despair and desperation so cleverly and atmospherically portrayed it becomes almost addictive. Evans chronicles poverty, filth, dark alleys, houses of ill repute, seedy landlords and their dilapidated properties, criminal bosses and down at heel types in a modern and easily accessible style.

After a brief spell finding its feet, the pacing is quite frenetic. The characters are painted in shades of grey that maintain the sense of mystery and the plot, sometimes baffling but never boring, sees Lackmann endlessly stumbling over a series of clues and red herrings. In the end, this complicated, brilliant and brutal story offers at least a glimpse of redemption for Lackmann, and certainly marks Evans as a name to watch.