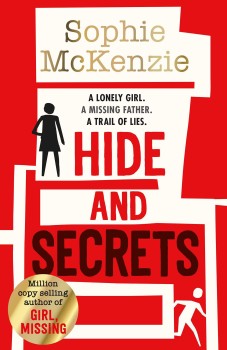 Cat’s father is missing, presumed dead. When a man phones her with the news that her father is alive, Cat’s world is turned upside-down, and she’s determined to find him, despite her mother’s disbelief and opposition.

Fourteen-year-old Cat is having a rotten time. Her father went missing a year ago, believed to have been lost overboard in the wreck of his boat. Since then, Cat’s younger sister, Bess, has refused to speak and now it seems that silence has become second nature to her, a self-imposed prison that she’s unable to break out of. Cat’s mum, a celebrity astrologer, is too wrapped up in her work to see how much her daughters are missing their father, leaving Cat to struggle on, doing her best to find the time to pursue her interest in sewing and making clothes, which is generally the only escape she gets.

When Cat’s mother tells her that she’s let one of the renovated barns on the farm to a man who’s come to combine work on a neglected mosaic with a holiday for himself and his son, Tyler, Cat is distinctly unimpressed. She doesn’t want to spend her precious time being nice to strangers. She has things to do, clothes to make, a sister to look after.

At the same time. Cat’s world is abruptly turned upside-down by a phonecall from a man claiming to be a friend of her father’s and bearing some startling news: her father is alive. The man, Rik, claims he faked his own death and has gone into hiding to throw a violent gang off his scent. It’s too much for Cat to take in, but she can’t just ignore what Rik has told her. She mises her father dreadfully and wants him back in her life, but when her mother finds out, she’s dismissive of Rik’s claims and grounds Cat.

With Tyler’s help, Cat takes up the search again and together they start to unpick the complex web of lies that surrounds her father’s disappearance.

Hide and Secrets combines mystery and teen romance into a very readable thriller with plenty of thrills and an equal number of spills as Cat doggedly sets out to track down her missing father. Cat’s fraught relationship with her mother lies at the heart of the book, as does her mile-wide streak of protectiveness where her younger sister is concerned.

Be careful what you wish for very much sums up Cat’s quest as she starts to get to the bottom of why her father faked his own death. He wants to keep the valuable prize that sent him into hiding, whereas all Cat wants is to put her broken family back together. Tyler and Cat are a likeable pair but in many ways it’s young Bess who steals the show and I was rooting for her to break out of her suffocating cocoon of silence.

Sophie McKenzie has served up a very enjoyable teen thriller, with likeable main characters and a clever mystery at its heart. The tension ramps up inexorably to an explosive, well-staged climax. The pacing is good throughout and Cat is a great protagonist. Tyler is a supportive presence throughout, and it was nice to see the two of them work together to get to the bottom of a dangerous secret.