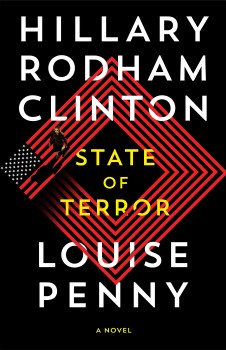 A series of terrorist attacks spark off a hunt for the forces behind a global conspiracy, pitting newly appointed US Secretary of State Ellen Adams against powerful opposition, both at home and abroad.

After a period of volatile politics, a new broom has started the sweeping the corridors of power in the White House, but the task is more akin to the cleaning of the Augean stables in Greek myth. The new president has enemies on all sides, and his predecessor’s supporters are still out to cause trouble. So far, so familiar? I doubt anyone could successfully claim that art isn’t imitating life in this slick political thriller by former presidential candidate Hillary Rodham Clinton and crime writer Louise Penny.

One of the first things Douglas Williams, the new President, does is appoint one of his detractors to the influential position of Secretary of State. It’s a shrewd move, and no doubt inspired in part by the old adage of keeping your friends close and your enemies closer, but it’s also a canny idea in that Ellen Adams was formerly the head of a global media firm that she’s used as a platform from which to challenge both Williams and the previous administration. By accepting the job offer, Ellen has had to step down from her previous role and distance herself from the media empire.

Ellen is a clever, competent woman in her late 50s who, to use the vernacular, doesn’t take shit from anyone. The person she relies on most in a professional – and occasionally also personal – capacity is her close friend and respected counsellor, Betsy Adams. The two women make a formidable team and their relationship is one of the linchpins of the book. Importantly for me, I liked both of them. I know liking isn’t a prerequisite of a good character, but with the current vogue for increasingly unlikeable protagonists in crime fiction and thrillers, it makes a refreshing change to have characters you can genuinely root for all the way.

State of Terror gets off to a fast start with a young foreign service officer, Anahita Dahir, in the Pakistan office of the State Department receiving an enigmatic text from an unknown source. She draws it to the attention of her superiors but her concerns – and curiosity – are dismissed. Then a bomb explodes on a London bus in what is immediately believed to be a terrorist atrocity. At first, it’s thought to be an isolated incident, but then an explosion in Paris, also on a bus, provides the clue to the anonymous warning and triggers a frantic scramble to identify the next target.

These opening salvoes set the tone and pace for a fascinating insider look at the complex, interlinked system of political intrigue and global power politics that stretches right around the world, with the US president as the occasionally inept, sometimes venal, all too infrequently decent and likeable spider at the centre of the web. The president in this book is somewhere in the middle of these extremes. He’s nowhere near as bad as his predecessor (always a good thing) but nowhere near as good as someone in that position should be.

Williams relies a lot on his razor-sharp Chief of Staff Barb Stenhauser, a woman who could turn nails into iron filings simply by chewing them, but she’s another person who it’s hard to dislike, and even Williams never comes over as irredeemably awful, despite the fact that he neither likes nor trusts the woman he’s appointed to a high-ranking job simply to keep a harsh media spotlight away from him.

Powerful forces are in play around the world, and Ellen Adams is caught up in a global game of politics being played for the highest stakes. The standing of the United States on the world stage has been greatly diminished by the antics of the previous administration and as a result, it’s now facing an enemy who has been content to play a long game and now has all its chess pieces in the right position on the global board, which is more than can be said for the new administration.

As a middle-aged woman, I found a lot to like in a story where two middle-aged women take centre stage in what is still a man’s world and do their jobs well without resorting to back-stabbing, fluttering their eyelashes or suffering too much existential angst. I’m getting increasingly grumpy with book publicity that gleefully informs me that someone (usually a man) has written a strong female protagonist, as if the default setting for women is weak and that anything else needs a fanfare of trumpets.

State of Terror establishes the Rodham Clinton/Penny writing partnership with flair, competence and skill, much like the characters they portray. I was hooked from the start and galloped through the book with positively indecent haste, whilst frequently completely lost in its myriad twists and turns. And I was as equally frequently wrong about the identity and motivations of those behind the attacks and the political power games. I enjoyed the globe-trotting and wry political asides as well as the wealth of detail than only lived experience – or incredibly good research – can bring to a story.

Naturally, there are some not-so-subtle echoes of recent history here which add to the entertainment value – unless you happen to be a supporter of the previous US administration – all of which contribute to this welcome addition to the murky world of political thrillers.