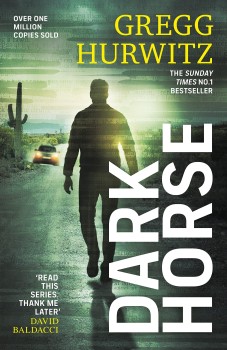 Former black ops specialist Evan Smoak – Orphan X, now the Nowhere Man – takes on a powerful drug cartel to rescue the teenage daughter of one of their bitterest rivals.

I’m a latecomer to the world of former assassin and black ops specialist Evan Smoak – codename Orphan X, arriving only with Dark Horse, the latest in the series. It’s always hard to drop into a party that’s been going a while where everyone knows each other and you’re the stranger lurking on the sidelines. But that wasn’t a problem here as I walked into an 18th birthday bash for Anjelina Urrea that was being held at a village hall in Eden, not far from the northern bank of the Rio Grande. At that point, Evan Smoak was nowhere to be seen, so I could settle into the book without having to deal with the main character and the weight of his backstory.

The party ends abruptly when Anjelina is kidnapped by armed men, leaving her devoted father distraught. Aragón Urrea, who describes himself as an unconventional businessman, turns to the Nowhere Man – Evan Smoak, formerly Orphan X – for help. He’s certain his daughter has been snatched by a rival cartel and taken to Mexico, but he knows that an all-out assault on the León cartel, run by El Moreno, the Dark Man, will only end in her death.

Instead of black ops, Evan Smoak now helps people who need his skills. He doesn’t ask for payment, but he does sometimes make demands of others before agreeing to help. In Aragón Urrea’s case, he wants the man to show how much his daughter matters to him by burning millions of dollars of drugs. When Aragón agrees, Evan starts the search for his daughter, but finding her is only the start of his problems. He then has to work out how to extract her from the heart of the León cartel’s empire, working with only the back-up of 16-year-old hacker Joey, a girl who knows Evan better than anyone, as she was also trained in the Orphan programme.

To be honest, if I hadn’t already been invested in the fate of Anjelina Urrea, I might have left the party once I got to meet the host, as a rather opaque chapter entirely in italics certainly didn’t help keep my attention, nor did it adequately explain any backstory. Evan Smoak is preoccupied by the reconstruction of his apartment, destroyed in a bomb attack, presumably something that happened in the previous book, and which is never really explained. I quickly learned that Evan has fairly serious OCD and takes his security very, very seriously, but it all felt rather staged.

The pace picks up when Evan meets Aragón Urrea and I started to gain more of an insight into the workings of the cartels and a picture emerged of incredibly powerful criminal organisations with exceptional reach and utter ruthlessness. The operational and logistical details of how Evan infiltrates the León cartel were fascinating, and I loved the irreverent, brilliant Joey and her inability – or rather unwillingness – to appear conventional, even when dealing with a very unconventional businessman. She brings some much-needed humour to a story with a very grim background.

The twist, when it comes, probably shouldn’t have been surprising but is certainly a hugely complicating factor in Evan’s rescue plans, forcing him to deal with the problem on an emotional as well as practical level, something he isn’t particularly well-versed in. By now, my reservations about Evan had been laid to rest and I was thoroughly immersed in the story.

The characters of the cartel members on both sides are nicely drawn but clearly slanted towards which side of the fence they’re on, with Aragón’s lieutenants being quirky and humorous, whereas those in thrall to El Moreno are entirely lacking in any redeeming features. It’s clear where audience sympathies are intended to lie, but despite the almost complete lack of subtly in the battle lines that are swiftly drawn, the characters of the main players, particularly in Aragón’s camp, are nuanced enough to sustain both interest and sympathy, and there is enough moral ambiguity flying around to sink a large gunship.

The sheer volume of technical detail thrown into the narrative was mind-boggling but came in such small bursts that enhanced the story rather than bogged it down and at times I was torn between wanting to search online to see whether any of the hardware actually exists and just being desperate to find out what happened next. The latter impulse almost invariably came out on top, but the things I did check all appeared to be true to life.

The action is as sharp as a knife and as well-placed as a sniper round. Dark Horse is a long book, but the pace never lags and it never became a slog. Dark Horse is a quality action thriller with some memorable characters. The story is clearly set up for a sequel and I definitely want to know what happens next.