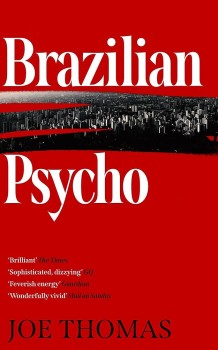 The lives of a small cast of characters play out against a background of real political events in the Brazilian city of Sao Paulo.

The action takes place in 2006, 2011 and 2019, the background in each case being a portrayal of the political upheaval underway at the time. The fictional characters are all to an extent caught up in contemporary events, although have varying degrees of understanding of the political machinations going on behind the scenes.

Detective Leme and his brother officer Lisboa investigate the death in his own home of the headmaster of the British International School. Their investigations do not get very far before a culprit confesses, from one of the favelas. Leme and Lisboa find this unconvincing, but their superior makes it clear the investigation will go no further.

In fact, testimony from Big Mouth, a former escort, hints that the death is related to a sexual preference which the authorities prefer to remain hidden. The book starts with a brutal attack on a man suspected of being a homosexual, and later in the book Leme is called to a horrific murder in a park reflecting the same animus.

Meanwhile, Leme’s wife works in a legal aid office situated close to Paraisopolis, one of the largest favelas in Sao Paulo. Paraisopolis is run by gangs, in particular the PCC, a countrywide organisation. We follow the activities of two young gang members, Rafa and Franginho, involved in a PCC scam to secure money from a government scheme to guarantee income for the poorest families.

The PCC is not the only one with their fingers in the till, however. Ray Marx, an American and former CIA operative, is a consultant for a finance firm Capital SP and looks to manipulate political events for the advantage of Capital SP and himself. The left-wing government is shown to be deeply involved in scams and mansalo, monthly payoffs to guarantee political support, which are universal.

While the previous books in the series tended to follow a fairly tightly-drawn story, Brazilian Psycho ranges widely over time and with a multiplicity of characters, linked in various ways – there is a five-page dramatis personae at the end. The whole makes for a forceful portrait of the city as seen through the eyes of different groups, if complex and sometimes as confusing as the city itself. Action is given in the present tense with short punchy sentences and brief paragraphs.

The author’s afterword indicates just how much of the book’s background is factual, and if nothing else is brilliantly informative about how this huge city operates. It is revelatory about the politics of the last 15 years, including Bolsonaro’s rise to power.