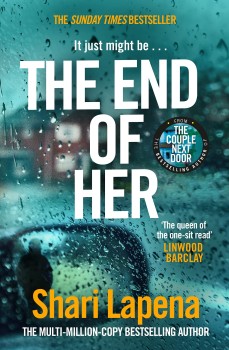 The End of Her

While Stephanie struggles with new-born twins, her husband is struggling with his past as it threatens to destroy his future.

Stephanie Kilgour loves her twins and she loves Patrick. But a double dose of three-month colic and a half-absent husband is squeezing the life out of this new mum. She is barely functional and wholly unready for the volcano that is about to spew lava onto her life.

Patrick loves his wife and he loves his twins. But sleep deprivation plus a heavy workload leaves him limp and ineffective. Even more so when a volatile ghost from the past turns up at his New York office: Erica is her name, blackmail is her sport, and she is used to getting her own way. All Patrick has to do is tap into that huge inheritance that Stephanie has just received and Erica won’t tell the police in Colorado that ten years ago he murdered his first wife. But Patrick reacts unexpectedly to her threats and tells Stephanie the truth about the circumstances of his first wife’s death. Or at least some of it.

Erica is furious. Patrick is terrified. Stephanie can’t help but doubt her husband. Yet the couple stand together in the face of the volcano, unaware that there is only one thing Erica can do and that’s up her game.

This story is a doughnut. A doughnut that sits next to a dozen more beautiful and delicate patisseries in the bakery, but still manages to seduce the eye and satisfy the stomach. Within the first few sentences I was certain that the writing style would be unpolished. My opinion did not change. There is way too much tell, a lack of show. And tautology is this author’s by-word. Her writing is a basic sugar coating and cheapens the book, to one of those empty-calorie buns of a wet-Sunday-and-nothing-else-to-do read. However, the bulk of the story delivers; intriguing enough to keep going, and not 100 per cent predictable.

The writing is not the only aspect that is questionable. The characters are flat and stereotypical. The author portrays Stephanie as an exhausted mother to colicky, sleep-shy twins. I get it; being a new mum is draining and leaves little room for other thoughts and actions. But I didn’t feel I knew Stephanie (or any of the other main characters) any better at the end than the start of the story. Perhaps that is why her actions near the finale were not in the least convincing.

Patrick is shallow and unsurprising in a negative way. I was initially ambivalent about this man, but thanks to his actions, he soon became the man one loves to hate, albeit in a Dallas/Dynasty-esque way.

Erica is vile. But her penchant for blackmail is overdone and detracts rather than driving the story forward. I am certain this is done to muddy the windscreen as we fly down the road towards the ending. It would have been more convincing if we knew what her behaviour had been like in the years between her short affair with Patrick in Colorado and her reinsertion into his life ten years later. Perhaps she had made a career of blackmail. Clearly, we shall never know.

This is a fun, easy, one-sitting read. And if the plots in the author’s other books are equal to this one, Shari Lapena could become my guilty pleasure. In the absence of doughnuts …