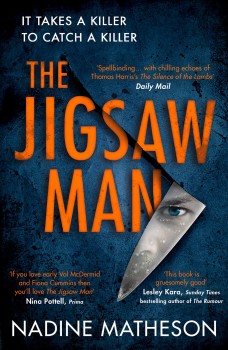 A PTSD-ridden police inspector is back on duty when body parts are discovered, distributed across her patch. This takes her back to the horror of dealing with a serial killer nicknamed the Jigsaw Man. This time, however, she doesn’t know if she can cope with the horror of it again.

Inspector Anjelica Henley is back at work after being stabbed and nearly killed by serial murderer Peter Olivier, known as the Jigsaw Man, during his particularly violent capture and arrest. She knows she is not ready; she has flashbacks, nightmares and the shakes, and her marriage is going through a rough patch because of her PTSD. Her partner Rob doesn’t understand her need to get back to policing, and resents the hours spent away from him and their young daughter, and ultimately risking their lives as well.

Then body parts start turning up and the nightmares turn into reality. Olivier is banged up in prison so it can’t be him who is chopping up bodies, but then his trademark is found on them.  The police suspect a copycat killer. Henley realises that she is being forced to return to the worst moments of her life and she must visit Olivier to see if he has any answers. Whatever else, she knows that pitting killer against killer is not going to end well for someone – although who, she is not quite sure.
With a title like The Jigsaw Man, this novel was always going to be a tough read. It opens with the body parts being discovered – and the visualisation of the dismemberment lingers in the mind rather too long for comfort – but what I wasn’t quite prepared for was my increasing involvement with the characters and the unrolling story. Yes, it is a bit Hannibal Lecter, but no, it is not the USA, it is definitely south London and it is obvious that the author knows her area – the nuance is quite different.

The story and the characters run with the developments in the investigation; threads are pulled in from the original killings, past coppers and civilians stalk and slide through the pages. Henley is a rounded figure, torn between home and work, exasperated by having to pair with a trainee, coping with colleagues who are friends, enemies and lovers, trying to find balance in her life; unnerved by experiences but brilliant and a bit reckless to boot. There are no bland police procedural ingredients in this story; there is heat and depth and spice, and it is darned good!