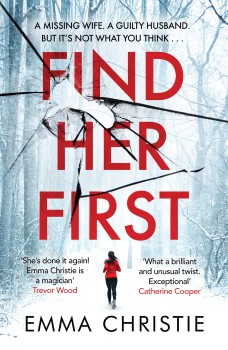 Paramedic Stef Campbell is missing and there is some suspicion that her husband, Andy, also a paramedic, is responsible for her disappearance. Nothing is as it seems, however.

Andy and Stef Campbell are paramedics, although Stef has been off work for some time, following a stress-related illness. There were some question marks over her performance and even accusations of being drunk while working. She has used the time away to further develop her art skills.

Betty is their housekeeper, who comes in a couple of times a week. She is quite eccentric and carries pennies either for guidance, or to distribute luck, as she would see it.

An early reveal suggests Andy may be having a relationship with Stef's sister, Alyson. This view is given some legs because he has strayed before with a work colleague, Vicky. Andy and Alyson spend some time trying to reach each other, but fail to, which continues to leave the exact nature of their relationship unclear.

Stef is missing and the police visit their house on a totally unrelated matter — Stef's ID has been found in the hands of a major criminal and they want to speak to her. Andy explains that she is away on an art retreat, in an area without mobile coverage and a specific address, making her totally uncontactable. This obviously raises the interest of policewoman Farida McPherson. An art colleague of Stef's is also missing, creating the possibility that they have run off together.

Separately, Betty has seen worrying signs at the house she cleans — including blood in the bathroom and the fact that she has found Stef's mobile in the house. She starts her own inquiries to find Stef and identify what is happening.

And at least one surprising relationship surfaces to add to the plot’s complexities.

I must admit to being confused by the 'now and then' timelines, some italicised chapters and a story delivered with rotating third-person accounts. Much of the book's start was to air the musings of the parties involved and I was rather hoping we'd get into the plot in shorter order.

But then the book got into first gear shortly thereafter and the pace accelerated.

I must say I didn't warm to many of the characters, although Betty does arouse some early sympathy and one character emerges as quite a nice person once the story has played out.

I have some tolerance for coincidences, but they do need a touch of realism. A game-changing telephone conversation overheard in the toilet cubicles of a totally random pub stretches credibility. Despite this, there wasn’t coincidence-overload, though.

There are twists and turns and red herrings galore. I didn't find it an easy novel to follow, but things do become very clear in the last tenth or so of the book and my earlier anxieties were found to be unjustified. Suffice to say it is nigh on impossible to identify how things will play out.

If a totally unknown plot path is your thing, then this is one for you. But if you are more wedded to crime fiction with a reasonable whodunnit factor, then it may be a disappointment.