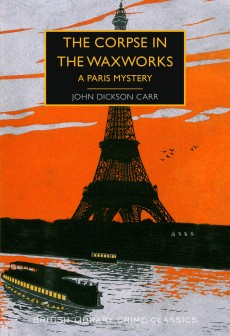 The Corpse in the Waxworks

Henri Bencolin of the Seine and head of detectives for the Parisian police faces one of his most baffling cases when a young women heads into the Gallery of Horrors at a waxworks and is found murdered in the River Seine the following day, then her friend is discovered dead and garishly displayed inside the same museum.

The hugely popular and prolific Anglophile American John Dickson Carr, who continued writing until the 1970s, was regarded as one of the finest authors of Golden Age mysteries. But there are no locked rooms or impossible crimes in the fourth in his magnificent series featuring Henri Bencolin, Juge d’instruction of the Seine and head of detectives for the Parisian police.

It’s probably the most bizarre and densely plotted of all his adventures and relies entirely on the ingenuity of Carr’s puzzle and some quite breathtaking background description to be both colourful and picturesque, compelling and frightening by turns, all building to a far from obvious, but really satisfying solution.

The crimes and the setting, the theatrically lit Musee Augustin waxworks and the Silver Key Club, a notorious maison d’assignation, an exclusive swingers’ club where its members, the rich and famous of Paris all wear masks are particularly well matched and grotesque.

Masks play a key part in this story, so resemblant of the best of Poe and related as usual by Bercolin’s young American straight man, sounding board and ‘muscle’, who in his trans-Atlantic naivete still manages to fall for all the smouldering, silk-bosomed, slit-skirted, possibly murderous mademoiselles who cross his path.

The Musee Augustin waxworks makes a splendidly eerie setting. ‘The purpose, the illusion, the spirit of a waxworks. It is an atmosphere of death. It is soundless and motionless,’ says its owner. Indeed this murky, subterranean museum where Marat lies stabbed in his bath, Louis XVI beneath the guillotine and Napoleon hands are clenched in his death agonies, bears a strong resemblance to London’s famous Madame Tussaud’s which began its life as a waxworks exhibit in the pre-Revolution Palais Royale where Marie Grosholtz, once art tutor to King Louis XVI’s sister and a member of the Royal Court, was forced to prove her allegiance to the Republican murderers by making death masks of executed nobles and her former Royal employers.

Marle and the suave, manic-depressive Bencolin are on what seems a ‘normal’ night out drinking in the roaring club and brothel section around the Porte St Martin. Amid the wail of saxophones and the stamping of the passionate tango dancers, the detective draws his companion’s attention to a man obviously out of place, then introduces him to the ageing Augustin, owner of the oldest waxworks museum remaining in Paris, and to Captain Chaumont a young colonial army officer on leave whose fiancée was last seen entering the museum’s Chamber of Horrors before being found battered and knifed in the River Seine.

Furthermore, Augustin insists that he saw a figure dressed the same as one of his waxworks follow the girl. It is a case that Bencolin, an expert on ‘impossible’ crimes, cannot possibly resist. The four men make their way to the museum – and make a shocking discovery, the body of a second girl, a friend of Chaumont’s dead fiancée, clasped in the waxen arms of another of the exhibits, the ugly and leering Satyr of the Seine.

Then they discover the museum also has a secret passageway that leads to the notorious Silver Key club, where the exclusive clientele are in fact little more than puppets in a sophisticated blackmail scam operated by a well-known professional criminal with whom Bencolin has clashed in the past.

This tawdry, match-lit mystery has almost everything you could want. There’s a brilliant detective, a worthwhile and satisfactory role for his sidekick, the full, almost lurid, atmosphere of late 1920s and early 1930s Paris where the new wealthy danced to ‘the fleshy beat of a tango’ – and an almost nostalgic throwback to an older France where a nobleman would risk his all on the turn of a card rather than allow his family name to be dishonoured.

With the usual clever and enlightening introduction by Martin Edwards, this is yet another triumph for the British Library’s Crime Classics series. And there’s a real bonus for Carr/Bencolin fans – a rare short story, The Murder in Number Four, in which Carr aims some pointed and none too subtle humour at a series of stereotypes.