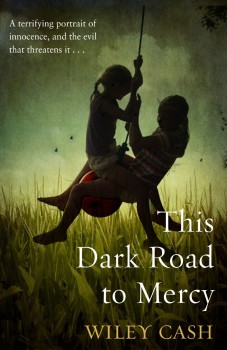 This Dark Road To Mercy

Easter Quillby and her sister are in a state foster home after the overdose death of their mother. Their feckless father, who has stumbled on a cache of stolen money, reappears to claim them and they go on the run pursued by a disgraced former detective and a psychopathic with his own score to settle.

Wiley Cash may be a new name to British readers, but won’t be for long. His name may suggest he should be singing in Nashville – and in many ways Cash is just as country as any performer at the Grand ‘Ol Oprey. He lives and teaches in his native North Carolina and his love for the region, its people, culture and religious faith is evident. He writes about the South he knows, following in the footsteps of William Gaines, Gail Godwin, Fred Chappell, Bobbie Ann Mason, and Clyde Edgerton, to produce a compelling story about family ties and breakdowns melded with a convincing depiction of the innocence of childhood.

Three distinctive protagonists relate this bleak tale of loss and redemption which grips from the opening words of 12-year-old Easter Quillby – an unforgettable narrator, far more adult than her age, a tough little girl who faces life head on and never sinks into self-pity. With her six-year-old sister Ruby, she is in foster care following her mother’s overdose. Then their wayward father, Wade, a washed up minor league baseball player, who has already signed away all rights, reappears in the girls’ lives.

Wade, who believes he has been given a second chance by his discovery of a huge cache of stolen money, decides to take them, but is pursued by Brady Weller, a disgraced former detective and now a state-appointed guardian and Robert Pruitt, a psychopathic and vengeful man with his own score to settle.

The well-paced and suspenseful narrative plays out against a background of the 1998 baseball season when the St Louis Cardinals’ Mark Magwire and Chicago Cubs’ Sammy Sosa, once a minor league player in North Carolina, battled it out to break the long-standing record for most home runs in a season.

The side issues fascinate, the violence and crime is almost a by-product, for this is ultimately the moving story of a family broken by failed dreams and forgotten promises. Easter is a totally captivating heroine. Her character is sensitively portrayed and she displays a poignant authority far beyond her age. The father, Wade, a petty criminal, mired in regret and thwarted ambition, we meet only through Easter’s narration, but his is a tale of attempted reparation and redemption.

Cash has captured brilliantly this bleak and almost Gothic look at family relationships. He plumbs the depths of despair but balances it with compassion and occasionally gentle humour.

It is truly a tremendous piece of writing to rank with the best to come out of a part of America that almost seems somehow apart from the rest of the world.