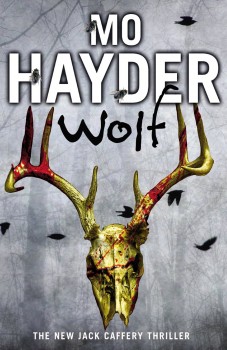 Two teenage sweethearts are horrifically murdered in a Mendip wood. The prime suspect confesses, but 14 years later the nightmare returns to haunt a family trying to put their memories behind them.

Oh no, Mo! The Chiller Queen is back with her seventh Jack Caffery novel and while, like all the others. it’s a masterclass in twisted horror, centred on the psychologically damaged DI, the actual basis for the plot just isn’t real.

Oliver Anchor-Ferrers has made millions, turning his love of the science of light into a deadly weapon – a torpedo that selects its own targets, can pass through the hull of a ship to attack a second and has been sold to companies around the world. Bad science, bad business and absolutely no relationship to the government’s arms export controls – such weapons would never receive a licence for unstable African countries.

Oliver drew the inspiration for his design from a particularly disgusting double killing of two teenage sweethearts near his family’s second home in the Mendip hills. Despite the confession of the prime suspect those murders come back to haunt his family who have spent the last 14 years trying to put the past behind them.

The gifted but unstable Caffery is still obsessed by discovering what happened to his brother, kidnapped as a boy. His private enquiries take him to Somerset, where in an unusual twist, he is dragged into the Anchor-Ferrers’ desperate problems – which in the end tell him exactly what he thinks he needs to know.

But Caffery plays almost an incidental role in what is a brilliantly depicted trail of horror, sparked by a little dog with an appeal for help tucked in its collar. Although the plot is partly driven by his back story – the enigmatic Walking Man again plays a crucial role – the book works well as a standalone.

Hayder’s great strength has always been her ability to judge pace and knowing when to switch narratives to keep up the tension and the reader turning pages. Characters appear, fulfil a role in moving the plot along – some like the mysterious Walking Man serve to expand our understanding of Caffery – then are dropped to concentrate on the awful predicament of the Anchor-Ferrers family.

And it is here that she shows her enormous understanding of human nature under the most intense pressure in a gripping and completely believable story of three people battling horrific circumstances. It’s grim, it’s scary, and above all it’s twisted. Once again Hayder has saved the best for last and the denouement comes as a real shock – unless you’re a better detective than Caffery!

As with the earlier books in the series, this really is a thriller worthy of its title, if you ignore the plot glitch, and will keep you on the edge of your seat all the way through. Quite where the flawed Caffery will go from here, I’m not quite sure – but along with a legion of others, I’m looking forward to finding out.