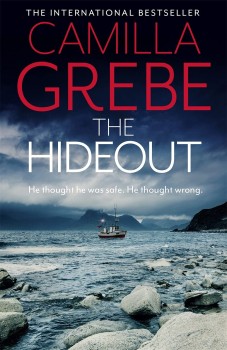 Teenage delinquent Samuel has to leave town in hurry. Under false pretences he takes refuge as a home help on a remote Swedish island that hides some dangerous, sinister secrets.

The Hideout is a strange mixture of dark and gruesome Scandi crime, lyrical descriptions of the natural beauty of Stockholm's southern archipelago and lengthy biblical tracts. Both female protagonists are the product of bible-bashing families and the whole story is heavy with religious symbolism.

The book starts off in a fairly routine way with a troubled young man, Samuel, caught up in Stockholm's drug world, an involvement which swiftly gets out of control. He has to make a sharp exit in fear for his life and ends up on a remote island to the south of the city. In need of temporary refuge, he takes a job with an attractive youngish mother who needs help with her terminally ill and bed-ridden son.

He knows he is taking advantage of her and will be on the road again as soon as he is fed, watered and the coast is clear.  But gradually it becomes apparent that all is not as it seems in the house of sickness and it might just be Samuel who is being taken advantage of …

Meanwhile in Stockholm, Detective Investigator Manfred Olsson and his team are looking into a series of barbaric murders, with young men turning up at intervals in the waters, bound in chains.  Manfred's baby daughter is seriously ill in hospital and he is reluctant to leave her side, whilst his wife finds solace in the on-line community of grief and sickness.

The story is told through the alternate voices of detective Manfred, young delinquent Samuel and his naïve but ever-forgiving mother Pernilla. This device works well. Camilla Grebe finds an authentic voice for each of her characters, and this kept me reading. The book is organised into sections, each headed by a bible passage from the book of Jonah, and it also features some pretty dreadful poetry about lions, lambs and doves – the significance of which goes right over the heads of the investigative team, and mine too. It’s all very gloomy and Scandinavian.

Everything comes together in the end and social media and the online community are blamed for many of society's ills. There are some loose ends not properly explained, dealt with in a 'well I guess we'll never know' sort of way and because of that, I found the ending somewhat unsatisfactory.