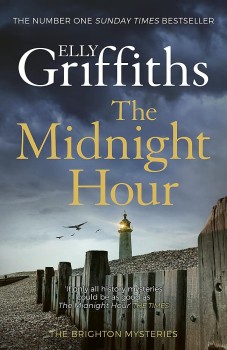 Elly Griffiths brilliantly evokes the mid-1960s (and yes, I can remember them) and the slightly seedy world of the professional actor. She says her Brighton Mysteries series was inspired by her actor/comedian grandfather Dennis Lawes, and as well as the action of the book coming to a head in the dead of night on Halloween she also makes use of the great Wilson Pickett hit of 1965 in the title of this story: The Midnight Hour.

Griffiths is so good at these period details. Her female detectives are continually battling for recognition in a changing world where Betty Friedan has just published The Feminine Mystique. Her showbiz character are finding their feet in the (new to them) film and TV industry while still missing the familiarity of Variety and the music hall stage. And in the background of this ostensibly cosy crime series lurks the brooding presence of Myra Hindley and Ian Brady.

This is the sixth book in the Brighton series to feature Edgar Stephens (now Superintendent) and Max Mephisto (one-time magician but now film star). The action ranges between Brighton, where the murder by rat poison of theatrical impresario Bert Billingham takes place, and Whitby, where Max is starring in a remake of Dracula with Bert's devilishly handsome son, Seth.

Bert's widow, beautiful but fading ex-music hall star Verity Malone, is the chief suspect. She calls in Emma Holmes (Supt Stephens’ wife) and her partner (reporter Sam Collins) and their recently formed all-female detective agency to help clear her name. It seems that Bert was a thoroughly deserving victim. Throughout a long showbiz career he had used his powerful position to take advantage of the young women he employed. Occasionally he had appeared in his own productions and most fittingly as King Rat in a Liverpool run of Dick Wittington.

This is the first major case for the Holmes and Collins Detective Agency and they sometimes struggle to combine detection with being wife and mother in Emma's case and a freelance crime reporter in Sam's. But natural ability will out and they generally manage to keep one step ahead of police officialdom. Max Mephisto dips in and out of both branches of the investigation with a maverick swirl of his cloak!

As well as the leads, the cast of well-drawn and regular supporting actors in this Brighton series make welcome reappearances. And enough new and interesting characters are introduced to make this a fun-to-guess whodunnit. There is a second death and a couple of attempted murders before the culprit is revealed, and even after that Elly Griffiths has some more surprises up her sleeve, good magician that she is. In her books she often writes of the magician's trick of misdirection and she really is the mistress of this. I thought that this time I really had this one sussed out but as always, I chose the wrong cup!

Although the murder mystery is solved, relationships between some key characters are left open and so there is plenty to look forward to in the next edition of this clever series.