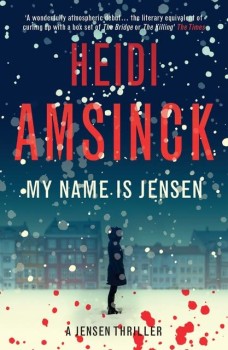 My Name is Jensen

Jensen is a Danish journalist who recently returned to her native Copenhagen after years working in London. While cycling to work one cold winter morning she comes across a body of a young man who must have frozen overnight. Yet stab wounds tell a different story.

Jensen, a 30-something journalist, has recently returned to her native Copenhagen after working as a foreign correspondent in London for the last fifteen years. Her UK job disappeared but she still has a place on the newspaper Dagbladet thanks to the formidable editor Margrethe Skov.

Then one cold Tuesday morning while cycling to the office, she comes across a body of a young man who must have frozen overnight. Closer inspection reveals that he has been stabbed. The gruesome murder and a sign with the word ‘guilty’ make a stark contrast with the colourful beauty of the street where he was found. The police initially consider the killing as another case of a homeless beggar, possibly of East European origin, losing his life – just as had happened to another victim shortly before.

Jensen wants to pursue the story yet cannot bring herself to put it in words. Although back on her former familiar stomping ground she feels lost in the city and aimless in her professional and personal life, lacking enthusiasm for writing, living – or rather camping in someone’s flat – as well as missing her desire to discover things and angry about her on-off married lover DI Henrik Jungersen.

She contacts Henrik, whom she has been avoiding since her return, to report the body. Deaths of the homeless generally make newspaper headlines in the capital city of the country described as the happiest in the world yet she doesn’t want to sensationalise it. The investigation progresses slowly, Henrik reluctantly shares some details, and Jensen keeps digging, unsettled by that word ‘guilty’ which clearly is an accusation aimed at someone, finding more information and getting into more trouble. What she discovers throws a new light on her perception of the society, and shakes her fragile inner peace, too.

Jensen’s relationships with other people, mostly men, are brilliantly portrayed. Her affair with Henrik is cringeworthy at times, although I understand how the mutual attraction pulls them together. Charming politician Esben is always on hand to assist with practicalities. However, her connection with a teenage delinquent Gustav seems most fun. She’s forced to take him on as an apprentice to appease Margrethe, his aunt and her boss.

The novel is as much about investigation as it is about the city itself. Atmospheric Copenhagen shows its friendly and enchanting face for tourists, but is much harsher towards some neglected or socially-abandoned citizens, with political aspects thrown into this particular setting. I enjoyed getting into the place’s spirit which was portrayed in such a lively way by the author. The old picturesque Magstræde, where the body is found, will now become a symbol of personal drama rather than a historic attraction.

My Name is Jensen is a compulsive read from Heidi Amsinck, and I do hope that we will get to read a sequel. Tension, serial killer (or not?) and moral questions make an excellent combination. And huge credit to Amsinck for creating relatable authentic dialogue and moments of wry fun in this bleak tale.