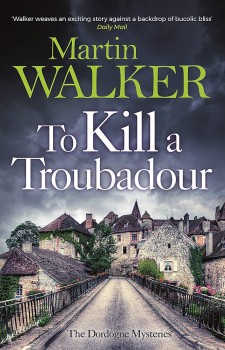 To Kill a Troubadour

Extremist Spanish nationalists threaten to spoil the summer peace of St Denis’ annual music concert. Bruno, Chief of Police, faces a race against the clock to outwit them.

In the absence of a holiday in France this year (and the previous two, come to that), I’m perfectly content to settle down with a glass of passion fruit syrup and wallow happily in the scenery and atmosphere of south west France. If I were any good at making crepes, I’d devour one of those as well.

Walker’s series is deceptive. On the surface it appears to be a village bobby dealing effortlessly with crime on his patch and then being home in time for an equally effortless tea, conjured up from his vegetable patch. Dig deeper, though (into the book, not the vegetable patch) and France’s turbulent history is guaranteed to return to haunt the 21st century country. And rural France isn’t immune from international politics either. References to Bruno’s upbringing and army experiences hint at angst there as well.

This time it’s the turn of near-neighbours Spain to be troublesome. Public-spirited Bruno, the backbone of St Denis’ rugby and tennis clubs, is organising a music concert and has booked a local folk group to play. Les Troubadours are known for A Song for Catalonia, which goes down like a lead balloon with the Spanish government who are keen to stamp out Catalonia’s bid for independence. And when a sniper’s bullet is found in wrecked car that had been stolen from the Spanish border, intelligence from both sides suggests that nationalist extremists may be planning an assassination in France.

To Kill a Troubadour is a pleasant summer treat even if it’s not one of the more memorable books in Walker’s generally consistent stable. For a start, it’s heavy on information dumps, and there’s the usual yawn-inducing saga of Bruno’s unresolved love life with the tiresome Pamela blowing hot and cold and the fiercely ambitious but out of reach in Paris Isabelle. I have taken to bawling ‘never mind Pamela or Isabelle, Florence is perfect for you!’ from the cheap seats. And I felt uncomfortable at a rather odd section where Bruno, an empathetic and non-macho lead, comes across as over-sympathetic to the abusive and alcoholic ex-husband. I was also longing for a cast list as the spooks from both sides of the border seemed to be multiplying!

Former Guardian journalist Walker rarely disappoints with this thoughtful series and in To Kill a Troubadour he melds together the bucolic and the political with an enviably steady hand.