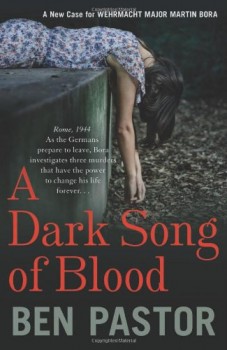 A Dark Song Of Blood

In early 1944, the allies are fighting their way up the boot of Italy, and the German occupation of Rome can clearly only be sustained for a matter of months. Wehrmacht officer Martin Bora, assisted by Guidi of the Italian fascist police, is assigned to investigate the death of a German embassy secretary who fell from a hotel window.

The dead girl had a busy social life, and the vested interests of several parties complicate the investigation. A second case then arises: an elderly cardinal and an aristocratic woman are found dead after an apparent murder/suicide. Bora, a Catholic who knew the cardinal well, is persuaded that the deaths were not what they appear. But with the allies closing in, finding the truth looks like a tall order.

A Dark Song of Blood is the third Bora novel, and by 1944 Bora is physically and mentally under great strain. Damage to his hand gives him pain, he has barely recovered from a leg wound, and he has nightmares from his experience on the Russian front, where he saw his brother killed. But he maintains an iron discipline, and gains some relief from his love of Rome, a city that he knows well from his youth. The author’s familiarity with the city comes through very visibly.

What is most impressive, however, is the portrayal of the atmosphere in Rome at this particular time. The war has turned against the axis and few of the occupying forces can be unaware that they are living on borrowed time; something the locals also know. The partisans are getting bolder and massive German retaliation against hostages taken at every provocation.

In this febrile environment Bora tries to sustain his ideas of honour and humanity against impossible odds. Intrigue is everywhere: within the German camp, the army the SS and the Gestapo are all at odds much of the time, and the Italian fascist remnant given official recognition but regarded with contempt. The Vatican is accorded formal respect but distrusted, for good reason - it is sheltering partisans. The relationship between Bora and Guidi reflects these strains, and is never close, although the actions of the pair show a mutual respect.

The book is densely packed with the developments in the lives of the protagonists over a few months and in truth the criminal cases are merely a thread which bring Bora and Guidi into contact. The real story is that of principled and feeling men at a dramatic time in history, swept along by events while having to negotiate political currents that threaten to suck them under. A Dark Song of Blood is a densely-packed, complex and subtle book - something for grown-ups.