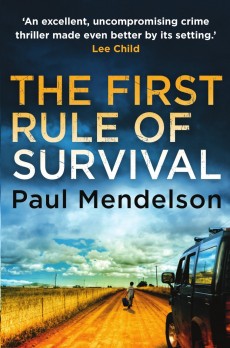 The First Rule of Survival

Three boys are abducted and seven years later the bodies of two are found showing signs of serial abuse. Colonel DeVries is determined to find those responsible.

Colonel DeVries of the South African police is called to the discovery of two dead young men in a skip behind a farm-stall in Cape Town. He is sickened to find that the bodies are those of two of three boys abducted on successive days seven years previously, a case which has haunted him throughout the intervening time.

DeVries is determined to find new evidence to break the case. He and his team get a few early breaks and committed police work produces solid results. Unfortunately, life in the SAPS has become very political and there are senior figures poised to use any miss-step to sideline DeVries and Du Toit, his boss. When the opportunity to close the case arises, DeVries is pressed to do so even though he is convinced the primary culprit is still walking free.

This is a cracking first novel which launches at pace from the first page and never lets up. It is told in the present tense, and almost entirely by dialogue, but a strong sense of Cape Town permeates the book. The back story of initial abductions and the police frustration at the lack of headway is told in small installments which counterpoint the rapid development of the contemporary investigations. DeVries, tortured by his inability to rescue the boys involved, is desperate to push ahead, and this comes through very strongly.

Unfortunately, progress is seriously impeded by the police hierarchy. Whether this interference is merely the exploitation of political advantage, or something more sinister does not become clear until the final pages. Developments in South Africa over the past few years have led to a divide; not between black and white but between those like DeVries and Du Toit who are associated with the old regime, and those who see police work as a branch of politics and have no time for the ‘old school.’ The hostility of the new men threatens to derail the investigation at every turn.

A further dimension to the story is Marantz, a former secret services operative who, like DeVries, has lost contact with his family through his job and now drinks excessively to dull the sensation of loss. The two drift into a friendship, and Marantz has access to resources when DeVries finds the official routes to progress slow. When the achievement of justice through authorised action is finally blocked, Marantz offers a solution. While this element of the story offers the opportunity for a satisfactory conclusion, it moves away from what is otherwise an entirely convincing police procedural.

The First Rule of Survival is Paul Mendelson’s first novel, but his experience as a writer of pieces for theatre, print media and TV comes through. A sequel is planned for publication next year and will be eagerly anticipated.